In April 2021 Mecardo looked at merino micron premiums concluding they were high with little room for further rises and probably a limited time at elevated level of three to six months. The premiums promptly rose another 200-300 cents and stayed at this elevated level for the past nine months. We re-visit these premiums in this article.

In the article last April the premium for the micron category two microns finer than the average merino fibre diameter to the category two microns broader was shown from the late 1940s onwards. In this article the focus is on rising micron price cycles since the mid-1980s, when the modern value for micron developed in response to containerisation, falling fabric weights and objective measurement of raw wool.

A slightly different approach to the rising cycles is taken in this article. For the main periods of rising micron premiums the low point of the premium is used as the starting point, with premium levels in the following 36 months (in both cents per kg and percentage terms) shown to allow comparison between the different periods.

Figure 1 compares six periods (“cycles”) of rising (and then falling) merino micron premiums in cents per kg clean. The month each period begins is shown in the legend, with the cycle starting in April 1986 the first cycle shown and the current cycle beginning in June 2020 the most recent. The small cycle in 2008 has been omitted.

The cycles shown in Figure 1 vary greatly with the cycle starting in 2010 peaking in month 13 while the 1986 and 1998 cycles did not peak until month 25. The 2016 cycle was less extreme but extended at high levels for the cycle from months10 through 27. The upshot is that there is not tight, simple pattern to these periods of high micron premiums. Past patterns do provide some parameters, of which time is the key measure. The current cycle is in month 20. The latest peaks were in month 25 as mentioned above so that implies the current cycle will be setting records for age if it holds at current levels beyond August.

There is enough discussion about energy prices, inflation, interest rates and geopolitical risk in the key developed economies which are key markets for wool apparel to suggest demand is likely to be weaker rather than strong in 2022-23, which would fit with merino micron premiums shrinking. 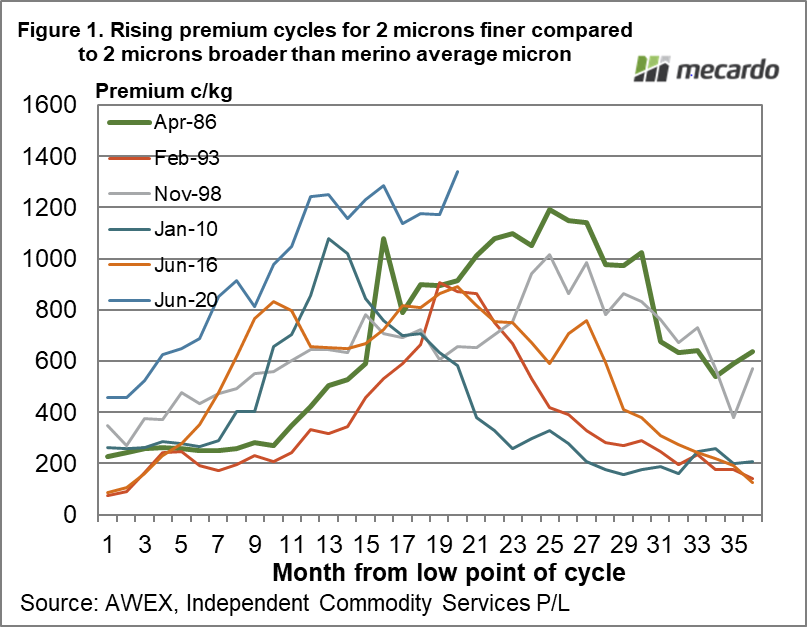