While there is a lot of action happening on the demand side of the greasy wool market such as energy issues in China, the development of RWS premiums and the usual spring market uncertainties, the driver of supply risk – seasonal conditions – continues to operate in the background. This article takes a look what the merino fibre diameter is up to.

The perceived wisdom is that Australian broad acre farmers, and in this particular instance merino wool growers, are backward because they do not use forward markets to any great extent. Perceived wisdom is not always correct. The other half of the greasy wool market, the buy side, rocks up to sales each year in anticipation that what was available a year earlier, give or take, will be available this year. Given the challenges posed by drought in recent decades, not to say of competing farm enterprises, this looks to be a total disregard of supply risk.

A big driver of fluctuations in supply is unsurprisingly, rainfall. Figure 1 compares the change in a weighted rolling 12 month rainfall rank for wool regions across Australia from the late 1990s onwards. It is smoothed (a rolling 3 month average) and is also advanced by 3 months. A projected change in the rank for the coming year is shown, which is developed using median rainfall. The shaded bars in Figure 1 shows the year on year change in the merino wool sold at auction, which has been adjusted for the downward trend in the merino micron in the recent decades and is also smoothed. Merino wool is filtered out for this article as the total clip average micron and merino fibre diameter have drifted apart, currently running at a difference of 1.1 microns.

Figure 2 looks to put the effect of Figure 1 into some perspective by showing the year on year change in 17 and 21 micron volumes (AWTA core test data), smoothed by 3 months, for the past decade. From 2015 onwards the average merino fibre diameter has been around 19 micron, so Figure 1 is showing the swings in volume 2 microns either side of the average at least for the past six years. As a rule, when the supply of one of these categories fall the other rises with the reverse also applying. Look at the drop in 21 micron supply in 2018 when the 21 MPG went to 2200-2350 cents, with the reverse happening in 2002-2021. That is some supply risk. In the wool market these swings in supply are in turn a big driver of the differences in prices between the micron categories.

Supply is not the only driver of micron premiums and discounts, but it would be fair to say it is the major driver. While seasonal conditions in the Australian wool regions are generally good (it is always an averaging game with only rare years when some regions are not dry) the year on year change in conditions is not improving, and it is the change in conditions which is correlated with the change in merino fibre diameter. For the supply chain supply risk in the coming year looks to be low – no nasty surprises, so the relative prices for the different micron categories is likely to return to more sustainable levels. 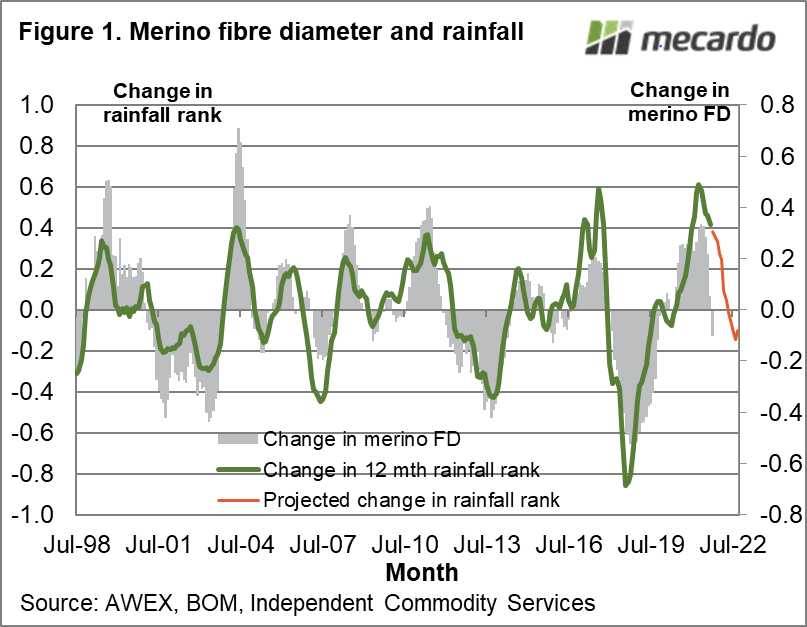