The greasy wool market opened with a bang last week, with prices falling heavily especially for combing length medium and broad Merino wool. This article looks at the price fall for August so far in relation to history, for some perspective.

For this analysis closing monthly prices of the average Merino micron price from 1947 have been used, with the current month to date. There is always the risk that the market may fall again, as it did in August 2019, enlarging the monthly fall, but that was after the wool market had been defying a downward cycle for some quarters and appeared to play catch up. This time around the wool market is in step with the general apparel fibre markets.

February 1991, when auction sales recommenced after the collapse of the Reserve Price Scheme, remains the period of largest price falls for greasy wool in percentage terms and even thirty years on ranks very highly in absolute terms (cents per kg).

Figure 1 shows the 30 largest month to month percentage falls in the Merino price from 1947 onwards. The August 2020 fall is currently coming in at the 30th position (see the highlighted bar on the right hand side of the graphic). It has been a solid fall but nothing extraordinary. The March 2020 fall of 17% is ranked 11th and the fall from August 2019 is ranked 9th. These big falls in price do not happen randomly, but rather in clusters after a strong rising price cycle, which means they have a substantial cumulative effect on price.

How does the fall look to the supply chain, in US dollar terms? Figure 2 shows the top 52 month to month price falls in the Merino price from 1947 onwards, with the current August price fall ranked as the 52nd largest in the past 73 years. In US dollar terms it was solid fall also, but certainly not unprecedented.  The 18.6% fall in March, when the effect of the pandemic hit the greasy wool market, was ranked a high 7th, with the fall last August (the pre-pandemic downturn in apparel fibre prices) ranked 9th.

Figure 3 shows the average Merino micron price in nominal Australian dollar terms from 1947 to this month. The top 30 price falls are denoted on the price series by their ranking. Excuse the somewhat messy presentation of the price falls, as they are clustered together generally following a major rising price cycle such as 1951, 1973 and 1988. In light of this clustering effect, the fact that we have had three such falls in the past year makes sense given the size of the 2018 price cycle, even before considering the impact of the first major worldwide pandemic in a century hitting in 2020.

A combination of the Merino market coming off a very strong rising price cycle which ran from 2015 through 2018 and the advent of a worldwide pandemic has caused the wool market (along with other apparel fibre markets) to fall. Price falls often come in “steps” as seen in the down cycles following past major price booms. The falls seen this month (so far) are another step down as the supply chain struggles with the effect of COVID-19 but the level of price volatility is not unprecedented. 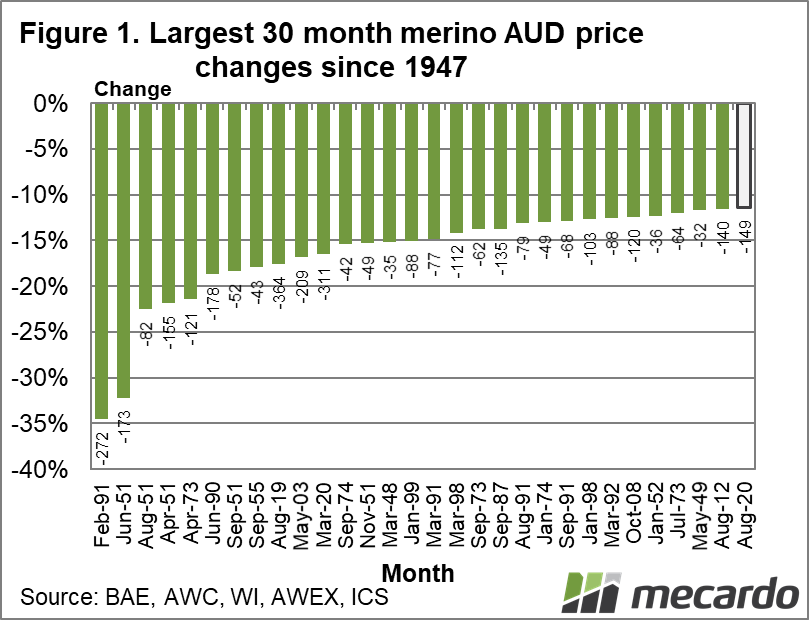