Amongst all the commentary about supply, demand, quality schemes, power shortages, fashion and so on it is the price received when selling wool which is the key to that wool being produced. This article takes a look at merino prices in the current market.

Wool covers a wide range of qualities. This article will focus on merino wool ranging from 14 to 24 micron, which is the range of fibre diameters sold last week at auction in Australia. The combing fleece data series used combined a wide range of length (above 50 mm greasy length), with vegetable fault less than 2%, no subjective faults and a staple strength 30 N/ktx or greater. The carding fleece series is made up of merino locks and crutchings with no serious stain and a vegetable matter range between 1 and 5%.

In Figure 2 the exercise is repeated for the merino carding series. This last micron cycle (beginning in 2020) has been unusual in that sizeable micron premiums have been operating in the carding part of the market as well as the larger combing section. This is generally not the case, hence the single official carding (Merino Carding) indicator produced by AWEX, which is skewed to the broader side of the merino carding micron distribution.  The price curve starts to rise from around 18.5 micron, peaking last week at 2000 cents for 14 micron.  The 10 year percentile level follows a similar trajectory, rising from around 41% for 18.5 micron to finish at 94% for 14 micron.

Prices on the broad edge of the merino micron distribution are complicated by a lack of volume and overlap with the finer crossbred micron categories. The drop in rankings for both the carding and combing merino series around 23-24 microns reflects the “gravitational” effect of the extremely low crossbred market.

While merino prices are sedate compared to the heady levels of 2017-2018, the market is high by the standards of the past decade, with fine micron prices high for both combing and carding wool. A depressed crossbred market is pulling the very broad merino prices lower, with the “bread and butter” 20-22 micron categories are trading around decade median levels. 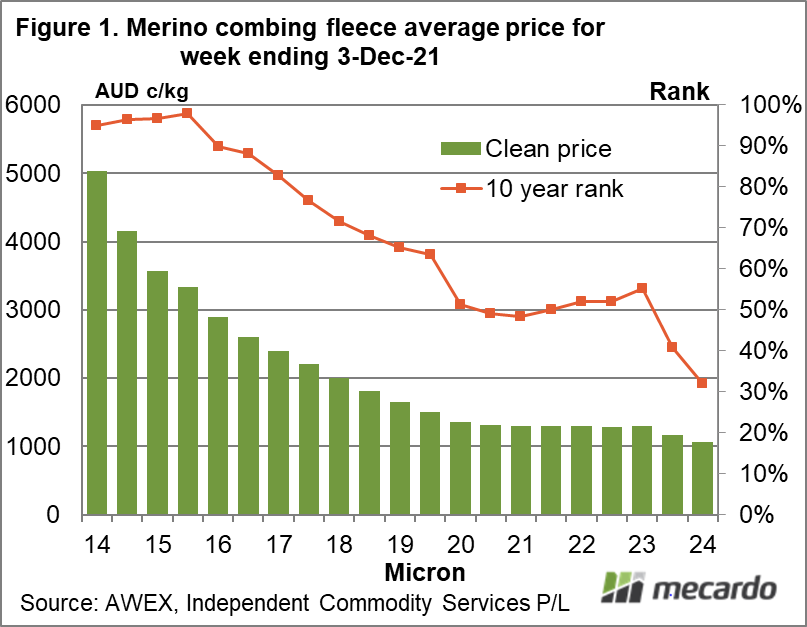 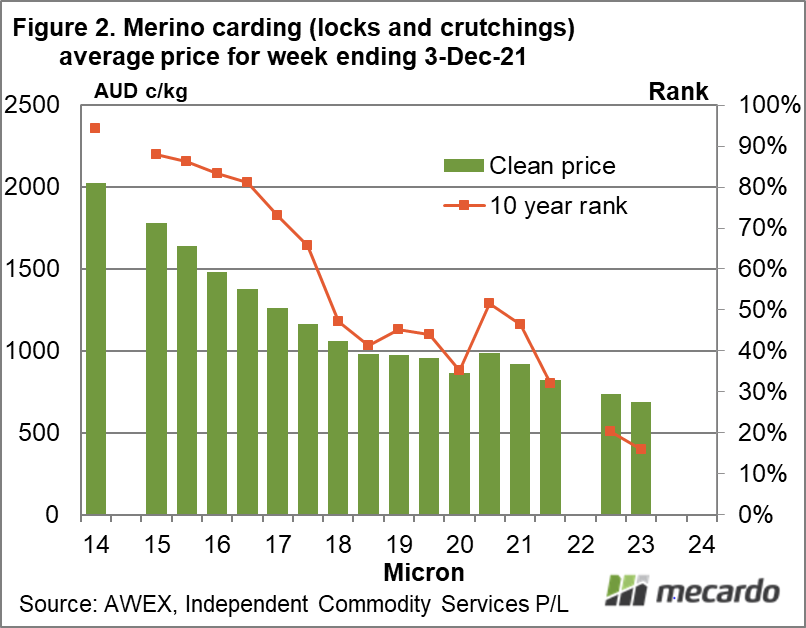