Traditionally, fibre diameter is seen as of more importance to combing (longer) length wool. Micron premiums and discounts vary in response to changes in supply (as Mecardo often discusses) and demand. This article takes a look at the effect of fibre diameter on merino carding wool.

In cardings the key specifications tend to be length, colour, vegetable matter and bulk (a subjective term not captured by the reporting system). Cardings are a minor part of the greasy wool market in volume and value terms, with a single AWEX indicator (by region) devoted to them. This is the Merino Cardings indicator – an average of merino locks and crutching prices.

The other two series in Figure 1 are carding series, with the locks and crutchings price flat from 15.5 micron and broader. The carding length fleece, pieces and bellies series was also flat, picking up slightly below 16 micron. Both cardings series micron curves were flatter for the finer micron categories than the combing fleece micron curve.

The rise in the combing merino fleece micron premiums has been large. Now look at the micron curves for the two carding series. They have followed the combing fleece effectively in lockstep. In the current market micron matters a lot to merino cardings prices. If you have a fine woolclip and are considering selling some of the bits and pieces including cardings privately and untested, think carefully about what price you should be aiming for.

It would be interesting to know exactly why fine micron premiums for merino cardings have risen so much in a time of general weakness in the greasy wool market, and supply chain.  It does mean that fine micron merino cardings should be sold tested where ever possible and mot mixed with broader wool. 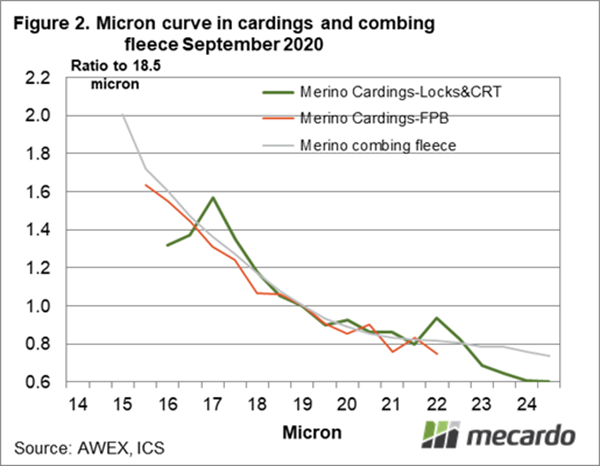