Results were again mixed in this week’s market, with Merino and Restocker lamb prices improving, while the finished market lost some shine. But with the forward contract prices on offer, there is plenty of positivity in the outlook for lamb.

Last week saleyard lamb throughput increased in both South Australia and Victoria, offsetting a decline in yardings in NSW and WA. East coast lamb yardings increased 4.6% on the week prior to see 178,383 head yarded. Victorian supply continues to lag behind the pace of last year, both in saleyard throughput and slaughter. There were more reports of processors in Victoria affected by Covid-19 and not operating this week.

Total east coast lamb yardings over the last month have been lower than last year, but above five-year seasonal average levels. Sheep yardings also lifted slightly last week, up 5.9% on the week prior.

An 18% lift in east coast lamb slaughter last week, pushed slaughter numbers closer to levels typically seen at this point in the year. 322,798 lambs were processed, bringing the weeks tally just 1% shy of the same week last year and 5% under the five-year seasonal average.

Merino Lambs in NSW were met with stronger demand. The Indicator lifted 48ȼ to 890ȼ/kg cwt which is 100ȼ higher than the same time last year. For South Australia, large yardings have driven widespread losses across all categories of lamb and sheep ranging from a 71ȼ drop in Merino lambs to 129ȼ down for light lambs. The National Heavy Lamb Indicator also ended the week lower, down 15ȼ to 944ȼ/kg cwt. Restockers came back with added enthusiasm, pushing the National Restocker Lamb indicator up 36ȼ to 1,017ȼ/kg cwt.

Mutton came off the boil slightly this week with the National Mutton Indicator down 19ȼ to 621ȼ/kg cwt.

With the late spring and early summer forward contract prices pitching at a premium to last year, there should be plenty of confidence in the outlook for lamb. The BOM is preparing us for another wet week in much of the sheep regions which may keep some stock back from the yards again. 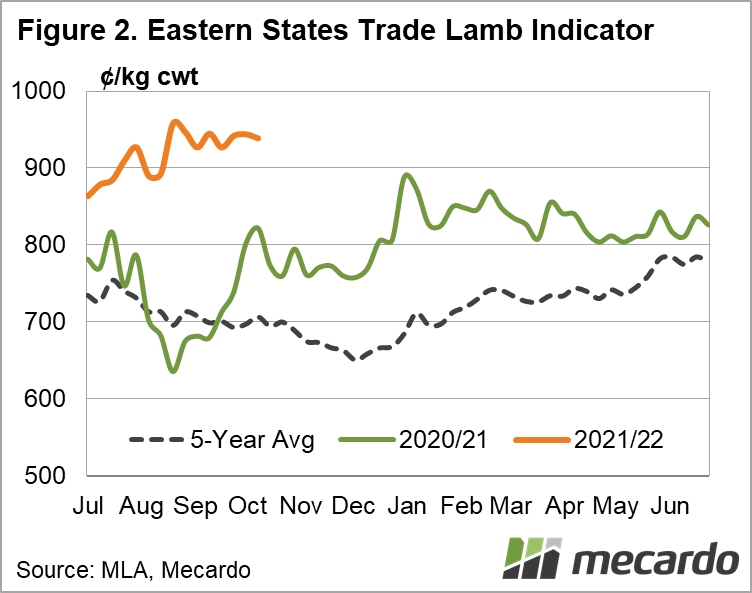