If our supply chains hadn’t been stretched enough already, they will once again take a hit in the areas affected by floods, and surrounding regions. Saleyard lamb and sheep prices continue to trade lower year on year through what has already been a disruptive time.

If our supply chains hadn’t been stretched enough already, they will once again take a hit in the areas affected by floods, and surrounding regions. Saleyard lamb and sheep prices continue to trade lower year on year through what has already been a disruptive time.

Sheep & lamb prices have mostly strengthened on the week prior according to the national indicators. The National Merino Lamb indicator lifted 27¢ on the week prior to 734¢, while Light lambs were the only national indicator to fall – down 24¢. The finished market also improved in NSW and VIC. The National Heavy Lamb Indicator increased by 8¢ to 801¢/kg cwt. Restocker lambs in Victoria gained 28¢, making up some of the recent steep falls, but as mentioned in this weeks analysis, they still look pretty cheap compared to NSW (view analysis).

The National Mutton Indicator gained 37¢ over the week to land at 588¢, making up for some of the weakness over recent weeks.

East coast lamb yardings dropped 23% to 149,939 head over the week ending the 25th of February. All eastern states saw a pull back in throughput bar Tasmania, and in the west an extra saleyard lamb supply lifted by 13% compared to the week prior. This pull back in supply saw yardings fall back to well below the levels of the same time last year and around 8% below the five year average at this point in the season. Supply of sheep also tightened, with east coast sheep yardings 31% below the week prior.

The devastating floods have adversely impacted a number of key processing plants and as a result, slaughter reporting is currently unavailable. Whether any major sheepmeat processors have been affected is still an unknown, but supply chains will again take a hit with lost access to roads, damage to retailers, farms and infrastructure in the affected communities.

Lamb supply out of northern NSW is very likely to be disrupted for some time as the focus becomes disaster recovery and animal health & welfare. We can only hope that the support is available where it’s needed most. 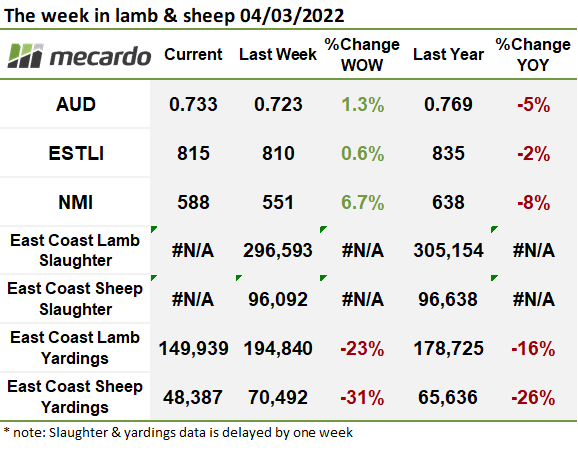 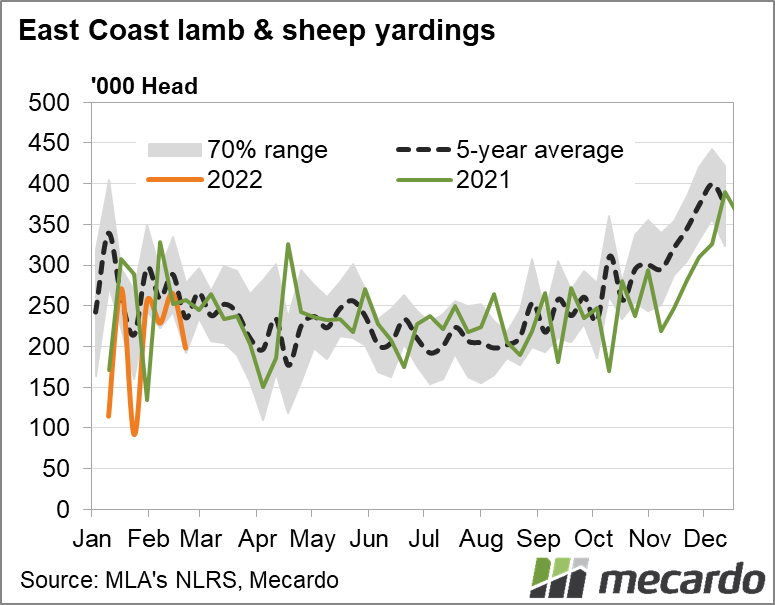