More grainfed than grass for the first time ever

The lotfeeding sector still hasn’t succumbed to weak cattle supply, with yet another survey posting a solid year on year increase in numbers. The Australian Lotfeeding Association (ALFA) and Meat and Livestock Australia (MLA) survey also saw a new record set for the proportion of cattle slaughtered which were grainfed.

The December quarter saw national cattle on feed numbers rally back to 1.159 million head (figure 1).  The gain on the September quarter was 3.7%, and numbers were 10.7% above the same time in 2020.  The biggest month on month increases came in WA and SA, while Queensland was 17% higher than December last year.

Placements of cattle on feed have lifted strongly, helping increase the numbers of cattle on feed.  WA and SA had massive increases in percentage terms, with placements up 76% and 94% respectively.  In terms of actual numbers, it was the biggest feedlot state, Queensland, which found 68,000 head more cattle than last year to place on feed.  Placements were, however, still well behind the record set in March 21.

The marketings numbers were the most interesting – marketings of grainfed cattle reached their highest level since March 2020, hitting 726,069 head.  Marketings lifted 2.5% on the September quarter, and 12% on December 2020.

Queensland lifted marketings by 15.9% on December last year, which was the main driver on the national scale.

Grainfed cattle made up 50.2% of the kill, compared to the five-year average of 35%.  Figure 2 shows grainfed cattle marketings are creeping higher, but it is the lack of grassfed cattle in the kill which has seen the grainfed proportion reach new highs.

Export demand for beef remains robust, and grianfed beef prices are strong.  While young cattle supply should increase with the herd rebuild, the main risk for lotfeeders is increasing grain prices.  Any margin squeeze will either have to see grainfed price rise, or feeder prices fall. 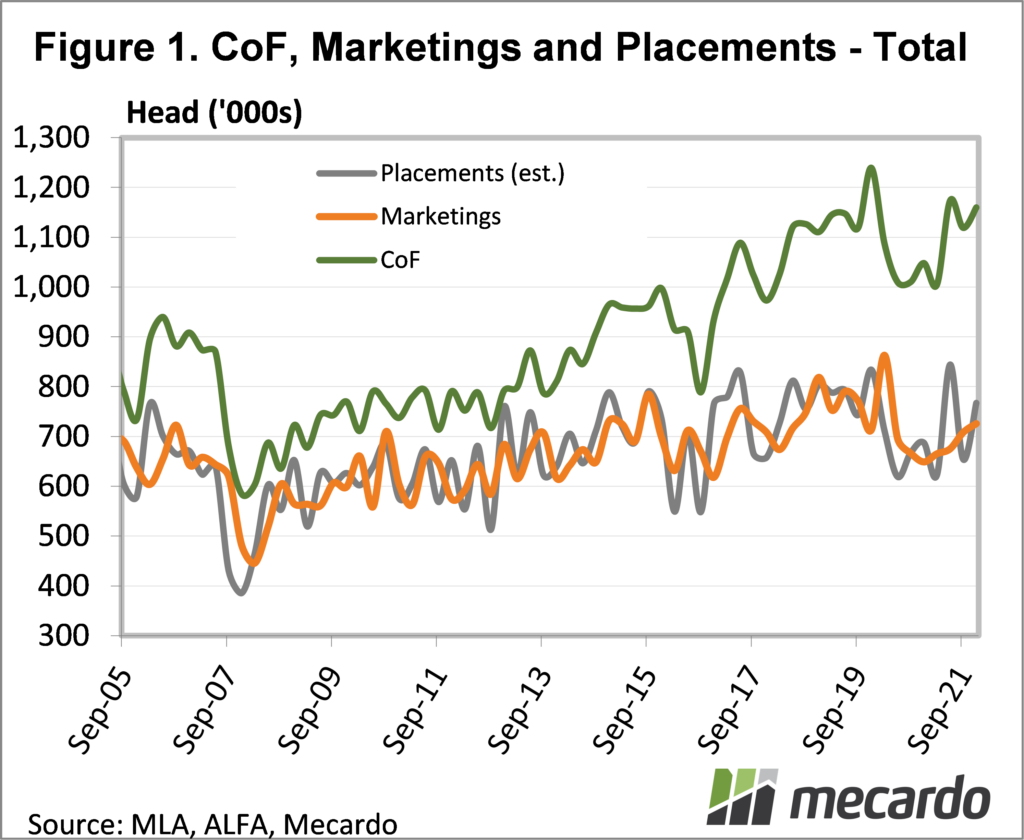