More lambs and more ewes according to survey

The MLA and AWI Wool and Sheepmeat survey is conducted three times a year, and gives a snapshot of the flock structure, and some ideas around how many lambs might be on their way to the market. February is the smallest third of the year for lamb production, but the breeding ewe numbers still provide some clues as to upcoming supplies.

The Wool and Sheepmeat survey is the only real data we get between Australian Bureau of Statistics (ABS) annual releases on the size of the sheep breeding flock and how many lambs are being produced. The survey results can be found on MLA’s website, and along with ewe and lamb numbers broken down by state, it reports on producer intentions.

One of the main changes we see in the survey results, as markets move, is not so much how many Merino ewes are on hand, but how many are to be joined to Merino rams.  Figure 1 shows the breeding ewe flocks broken down into Merino for Merinos, Merino to be joined to other rams and all other ewes.

Merino ewes to be joined to Merino rams were relatively steady on both the October survey and February 2020.  Interestingly, given the move in wool prices over the past year, there has been a 5.7% fall in Merino’s for other rams relative to February last year.

‘Other’ ewes shown in figure 1 include first cross, shedding and meat breeds.  The numbers of ‘other’ breeding ewes lifting 6.2% on October and 9.6% on year earlier levels.  At 10.9 million head, there are nearly 1 million head more ‘other’ ewes on hand.

After the drought caused a low for February ewes joined and lambs marked in 2020, the recovery added 780,000 more Merino lambs, and 300,000 ‘other’ lambs (figure 2).  Despite the small total number, the increase in February lambs does suggest winter lamb supply will be stronger this year, and more along normal lines.

On the breeding ewes side, the half a million head fall in first cross ewes on hand, will be outweighed by a million extra ‘other ewes’. Obviously a lot comes down to marking rates, but having more ewes joined will result in a lift in lambs marked in June and October.

In the short term there will be more lambs this winter, but likely not enough to see prices fall in the winter, but maybe not rise to new record highs. 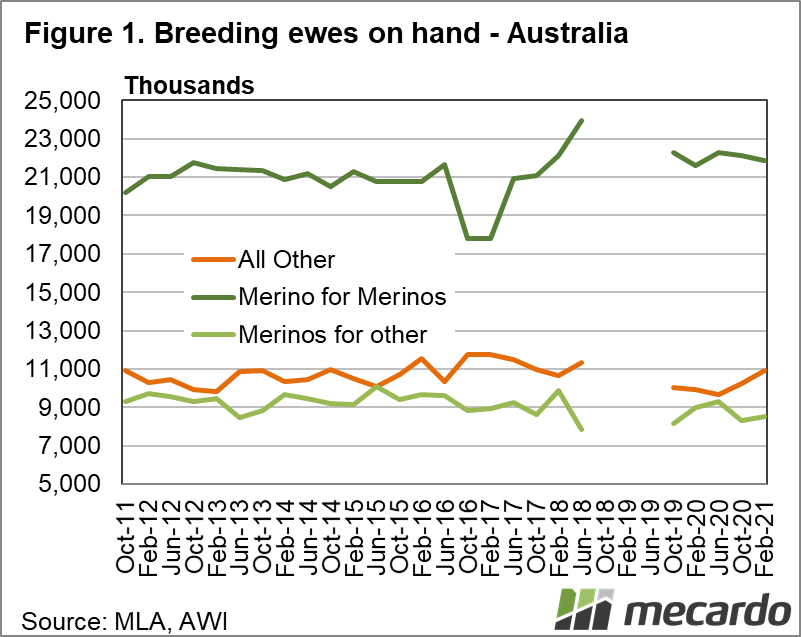