More Merinos and fewer ‘other’ will support lamb prices

Most of Australia’s lambs are born in late winter or early spring, hence the importance of the numbers we get out of the AWI/MLA Wool and Sheepmeat Survey. Recently released, the surveys numbers are pointing towards a steady breeding flock, but fewer lambs for slaughter over the coming months.

The lower numbers of lambs started with weaker joining numbers last summer.  According to the survey there were 22.1 million ewes joined for July to October lambing, 2.1 million head, or 9% fewer than in 2019. This is a large fall, which led to fewer lambs being marked. Total lambs marked from July to October was estimated at 21.9 million head, just 3% lower thanks to better marking rates.

Wool prices were still flying high last summer, and this seems to have led to a shift back to Merino being joined for Merino lambs.  There were only 2% fewer Merino ewes joined to Merino Rams, and with the better season, the survey estimates there were 1.15 million, or 10% more Merino lambs marked from July to October compared to last year.

The good winter and benign spring weather in the south saw lamb marking rates for both Merino and Other lambs at close to record levels (Figure 2).  Merino rates were up to 92%, from 82% last year, while Others were relatively steady at 109%.

The last chart to look at is Breeding Ewes on Hand.  The number of breeding ewes gives us an idea of where lamb supply might be headed next year. In October, Australian sheep farmers had 40.7 million ewes on hand. This was marginally higher than October 2019.

Total Merino ewes on hand were steady, but those to be joined to Rams other than Merinos were up 2%.  All other ewes were up 2.2% on 2019, with more ewe lambs being retained with the better seasonal conditions.

Fewer crossbred lambs and more Merino lambs is positive for the lamb market over the coming months. Merino lambs are generally lighter, and many ewes will be retained, which means total lamb supplies are likely to be lower than last year as we move through the first half of 2021.

This doesn’t mean prices will reach the highs of last autumn, due to weaker demand, but it certainly will provide price support. Click on figure to expand
Note: Gaps in the data for Oct 2018-June 2019 were due to temporary changes to published reporting categories 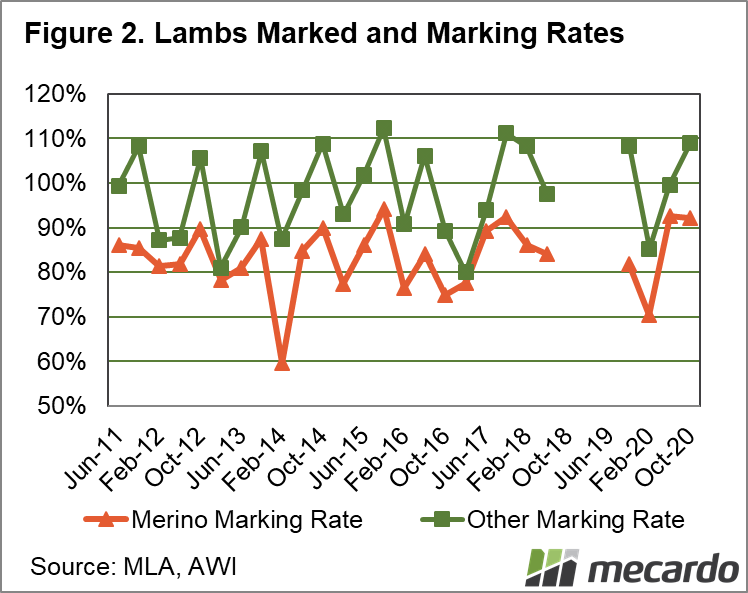