The spring flush of lambs in Victoria is picking up steam which added pressure to the lamb market. Mutton prices have bounced back after a rapid fall, but still look competitively priced for overseas buyers thanks to the low AUD.

Results were mixed between categories, with the last weeks results largely flipped on their head. The National Heavy Lamb Indicator lost nearly half of last weeks gain, ending at 865¢/kg cwt. Merino and light lambs each improved, lifting 20 and 30¢ respectively. In South Australia, prices have been volatile recently but it was green across the board this week with large price lifts for the available store lambs.

The National Mutton Indicator made up an additional 20¢ over the week to 634¢/kg cwt. With the AUD edging lower each day, overseas buyers are likely snapping up mutton while it’s competitively priced, compared to recent months.

Lamb slaughter continued to lift last week, rising 4% from the week prior, while sheep slaughter dropped 7%. It was the first time since the end of August that the weekly slaughter rate for lamb and sheep combined has been higher than the same time last year, even if only slightly.

East coast lamb yardings lifted another 10% last week, with 204,813 head yarded. In the last fortnight weekly lamb yardings have lifted over 30%. Unsurprisingly it’s in Victoria where the lambs are heading to saleyards at a stronger pace. An additional 14,903 lambs were yarded in Victoria compared to the week prior. But the seasonal delay is still being reflected in the weekly numbers with 14% fewer lambs yarded than the same time last year in Victoria.

Sheep throughput also jumped last week, up 25% on the week prior, largely due to a significant lift again in Victoria.

While processors are still reporting constraints due to lack of labour, the rise in slaughter levels in recent weeks suggests that at least some have managed to find additional capacity. How much more capacity there is for further slaughter increases remains to be seen. While producers will respond to any significant falls in the market by holding back stock, the limitations of processors are likely to stifle much upside. 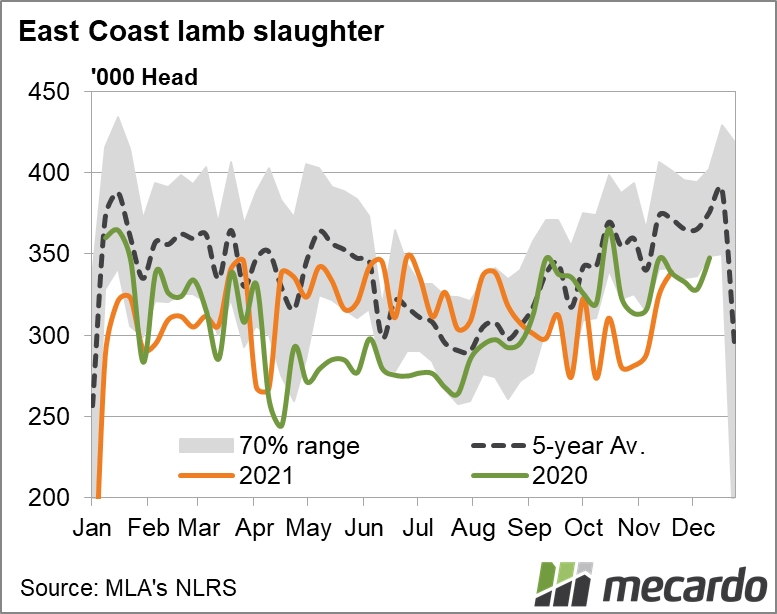