Mutton exports up, but not much

Chinese demand for mutton has returned to pre-Covid-19 levels, with Australian exports to the country matching 2019 volumes for February. This has pushed total mutton exports up for the month, however volumes for the year-to-date are still tracking well below the five-year-average. This added demand hasn’t been enough to boost Mutton prices back to year-ago levels however, with the National Indicator trading at 47ȼ/kg lower than the same time last year (but still well above long term averages).

China has not only returned to pre-Covid mutton imports, but looks to be ramping them back up into record territory. They imported their equal highest February volume of Australian mutton to date, at 6242 tonnes shipped weight. This is the same volume sent to China in February 2019, but more than 52% higher than the five-year average for the month. At 46% of the market share of exported Australian mutton, this increased demand from China makes up all of the lift in exports from January to February. Every other mutton export market, except for Singapore, took less Australian product in February compared to the previous year.

Live sheep exports have started the year stronger than 2020, but again are historically very low. January saw nearly 63,000 sheep exported live, compared to 47,000 last year. Only once in the past decade has January recorded a lower number of live exports, and that was in 2015, followed by a very high February. Total 2020 live export sheep volumes were 27% lower year-on-year, a historic low according to Meat and Livestock Australia, but they predict this will see an increase again in 2021 – albeit only 4%.

Total mutton exports for the year-to-date are pretty much exactly half of where they were for the same period last year, which can’t all be explained away by a lack of supply, with year-to-date sheep slaughter down 33%. If we look at Figure 3, we can see on a five-year-average basis the National Mutton Indicator is usually headed up at this time of year. Last year however, there was a considerable overall drop from March to May, despite the usual drop in supply, but in line with when export levels began to drop below year-ago volumes.

Despite the flock rebuild slashing supply and boosting demand, export markets for slaughter sheep remains an important part of the puzzle keeping mutton prices at current historical highs. As we get further into this retention cycle, allowing more old sheep to leave the breeding system, retaining that renewed hunger from China will be key. 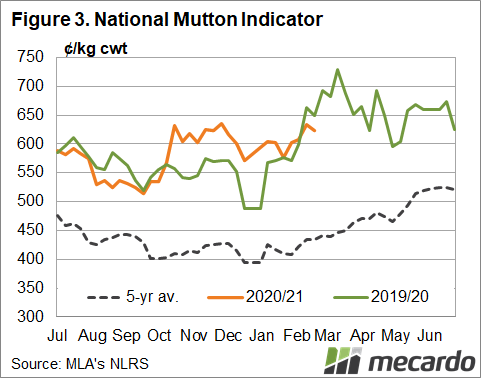