MLA’s projections were completed before the big rains hit the east coast, and as such they might need a little adjusting, with the herd maybe finding a little support, and slaughter possibly being even lower than projected.

The recent rain could see somewhat of a reprieve for the herd, with fewer females likely to flow to processors over the coming months.  With the herd already at a low, it’s unlikely it could remain much higher than 25 million head, but it should find a base this year.

With the recently received rain it is feasible cattle slaughter could move below 7 million head for the first time since 1996.  The lower slaughter goes, the stronger the herd rebuild, and obviously much depends on seasonal conditions from here.  If the rain continues, we could see the herd rebound a bit quicker than expected.

Based on current conditions, it is reasonable to assume cattle supply is going to decline this year, and in coming years, with the question being by how much.  With current strong demand, it probably doesn’t matter how much cattle supply falls, as prices are likely to reach new records regardless of how many cattle are available.

The pace of the rebuild will govern how long strong prices last, but according to MLA’s projections, supply will be tight for at least three years. 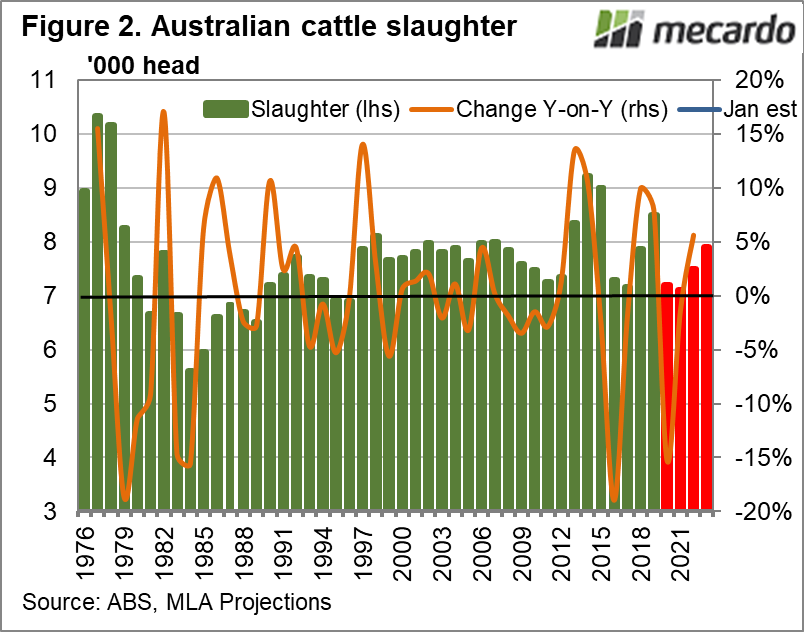