We know New Zealand is basically the only competitor Australia has in the lamb and mutton markets, but they are also a pretty big player in the lean beef export sector as well. Like Australia, NZ cattle slaughter and beef exports show seasonality, however, it is much more pronounced and supplies are now on the slide.

There are plenty of beef cattle in New Zealand, but dairy cattle make up a much larger proportion of the kill over the ditch.  In 2020 just over 42% of the adult cattle slaughtered in New Zealand were dairy cattle, largely cull cows and young bulls.

Figure 1 shows NZ adult cattle slaughter is currently in the midst of its annual decline.  NZ cattle slaughter has been close to last year, and the average, and there is little reason to think it isn’t on its way down during winter.

New Zealand has a small population so export most of their beef.  NZ exported a record 473,000 tonnes last year, compared to Australia’s 1.04 million tonnes.  NZ beef exports follow a similar trend to slaughter, bottoming out in spring, after peaking in autumn.

Falling beef exports from New Zealand are going to further add to tight global beef supplies.  For Australian cattle producers this is good news, with the US and Chinese buyers likely to compete harder for lean beef in later winter and spring.

Export prices to the US have taken a breather in the last fortnight, as US buyers baulk at the rising values.  They could take another leg up, and offer more support for local finished cattle prices, as supplies out of New Zealand fall. 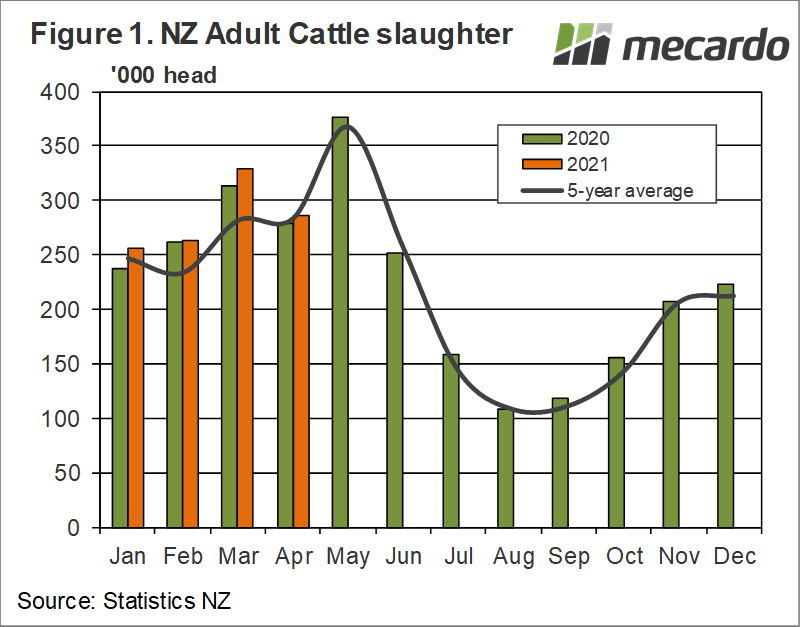