Pricing in the greasy wool market has been extremely tricky in recent months with high vegetable fault levels leading to extreme discounts, while at the same time demand for non-mulesed and even better non-mulesed RWS wool has picked up. In the background demand has been relatively weak, which is not a great surprise for this time of year. With this in mind this article takes a look at non-mulesed premiums for merino fleece.

Traditionally merino fleece pricing has been based on an additive model where a base price is established and then premiums or discounts are added for particular levels of characteristics. This method underpins the classic premium and discount reports produced by the industry. The reality is more complex and has become so. Some mill consignments require a certain set of characteristics, which if a lot meets enables it to be considered. For example the “traditional Italian” type of merino fleece will have a staple length between 70 and 90 mm, a staple strength of high 30s and greater, a vegetable fault level somewhere around 1.8% maximum for individual lots with an average for the consignment of 1% and so on. As a result we get some big step differences in prices between wool types as lots qualify for different mill orders.

With this complexity in mind Figure 1 compares two eastern merino combing fleece series sold in August, one which was accredited CM-NM (not mulesed) and the rest. The series are shown by lines (left hand scale) running from 13.5 micron through to 22.5 micron (horizontal axis). The difference between the two series in percentage terms is shown by the bars (right hand scale). One complexity not dealt with here is the presence of RWS wool in the CM-NM series, it is included and will boost the price and price difference.  As previous analysis has shown, the price effect (premium) for non-mulesed merino fleece increases as the fibre diameter decreases from around the merino average of 19 micron. It is quite substantial for 18 micron and finer wool. For the major merino categories (18.5 to 20 micron) the premium is in the 1% to 3% range. What is new is that a premium is showing up on the very broad edge of the merino fleece micron distribution (on vert small volumes).

Demand for non-mulesed wool continues to show up in the greasy wool market, with the bigger premiums showing up for the finer merino micron categories. For the major merino categories the premiums continue to be in the order of 1-3%, although RWS lots (on very small volumes) occasionally are priced at much greater premiums. 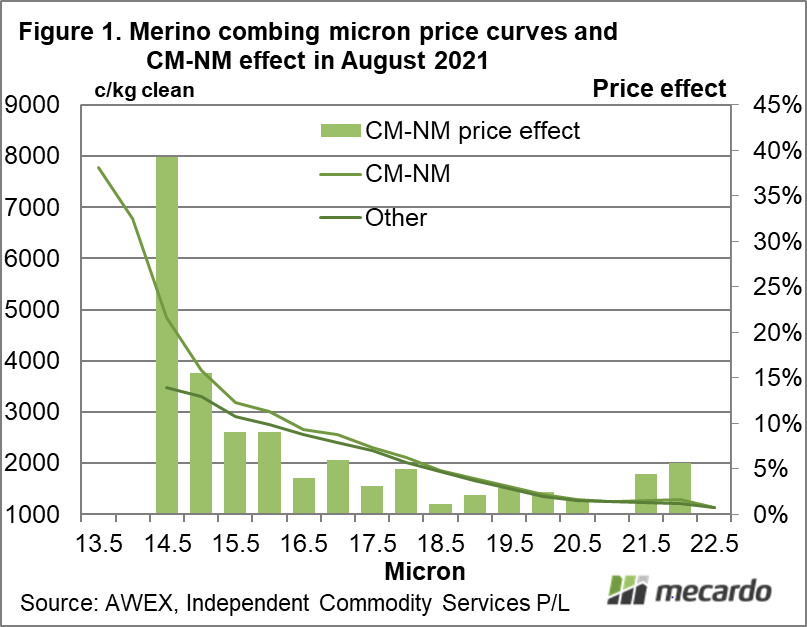