A request for Mecardo to look at wool production in central west Queensland has prompted this article and a follow up one to come later in the week. Queensland as a whole generally accounted for 10% of the Australian sheep flock through to the mid-1990s, when a decline relative to the national flock began, stabilising around 3% in 2014. This article looks at northern Queensland wool supply and price relative to the rest of Australia generally.

The request was for an article focussing on wool production out of central west Queensland, best described in wool statistical areas, as encompassing Q12, Q14, Q15 and Q17, roughly defined as country north of a line running from Rockhampton south west through Tambo. A look at 2019-2020 sales show that these four regions accounted for 85% of northern Queensland sales by clean volume, and given the northern Queensland data is ready to hand the analysis for the article uses northern Queensland data.

To give some background perspective, ABS annual data for Queensland beef cattle, sheep and crop area numbers from 1970 through to 2019 is shown in Figure 1. It shows sheep numbers peaking around 1990 at 18 million and the trend all the way down to 2 million by 2014, while beef cattle numbers rise by around 4 million (more than enough to account for the drop in sheep numbers) and a highly variable crop area.

The final schematic in this article (Figure 4) repeats the format of Figure 3 but with clean prices per kg. Again, the northern Queensland average clean price outperforms the average Australian price (by 4% during the past couple of decades) but when compared to the national merino average price it underperforms by an average of 3.5%. 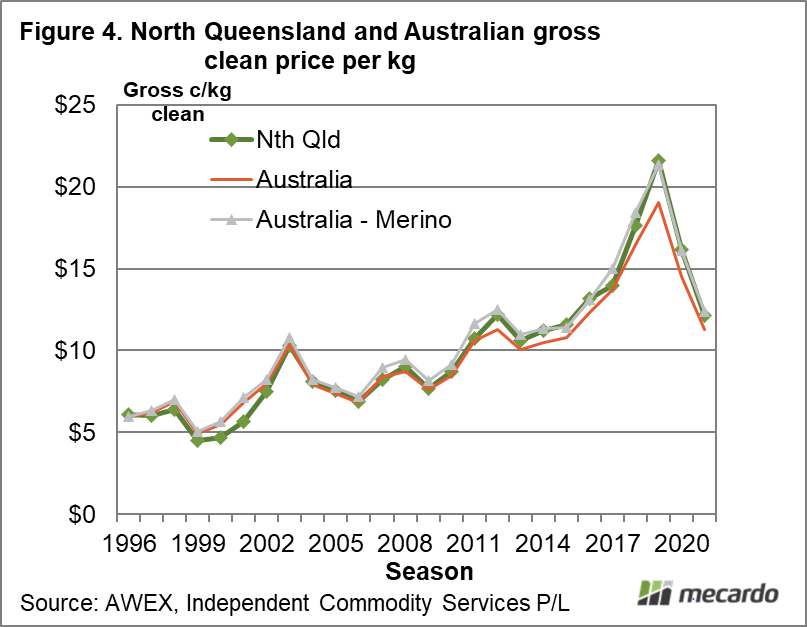