Not building a lamb backlog yet but it’s coming

The concerns surrounding a lack of kill space and the ruination of the lamb market was all the talk a couple of weeks ago. We now have the first week of slaughter data under Victoria’s stage four restrictions, and at this stage, it seems a lack of kill space isn’t the problem with price, at least not yet.

The cuts to lamb and sheep processing capacity in Victoria has had an impact in that state, but other states, especially NSW, have east coast slaughter numbers running well ahead of the same time last year.

Figure 1 shows that last week, the first week of the new restrictions, saw Victorian lamb slaughter fall less than half a per cent on the previous week.  It’s more realistic to compare lamb slaughter rates to the month leading up to COVID-19 issues in processors.  Still, last week’s slaughter was down just 4% and was higher than the same week last year.

On the east coast scale, the strong increase in NSW slaughter is compensating for Victoria’s restricted kills. Over the last month, NSW has slaughtered 18% more lambs than last year, and has maintained levels well above the levels of any time since August 2019.

We can see in figure 2 that east coast lamb slaughter has, for the last two weeks, been 9% above the same time last year. While lamb slaughter has been below the five-year average, that is to be expected given the smaller flock.

The slaughter numbers look like processing capacity is keeping up with supply, however, price action would suggest otherwise.  This week the Eastern States Trade Lamb Indicator (ESTLI) has fallen to an 18-month low.  The ESTLI has fallen by over 100¢ since the start of July, which suggests that supply is outstripping demand.

Moving forward, the issue of processing capacity will become more important.  Figure 3 shows what is the worst-case scenario.  Here we have assumed last week’s Victorian sheep and lamb slaughter was as high as it will get under restrictions, and substituted it in for Victorian slaughter in 2019.

If stage four restrictions remain in place for another four weeks as planned, the difference between the blue line and last year’s slaughter is 173,000 head.  This equates to 31% of peak east coast weekly slaughter, which would eventually be absorbed.

The real problem will be if Victorian slaughter is restricted for longer.  Figure 3 shows the difference builds as we move through spring and summer, and every week Victoria can’t ramp up slaughter, the weaker prices will be, and stay, while the backlog is cleared. 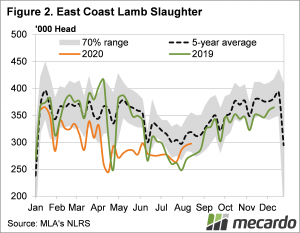