While steaks, silversides and stirfrys are the types of cuts most Aussies look forward to from beef production, there are plenty more parts of the cow in demand internationally. Co-products, both those more commonly used in meals overseas such as tail and tongue, and those used for the likes of leather and oil - have been increasing in price. June and July saw beef offal exports out of Australia plummet, and prices responded accordingly.

According to Meat & Livestock Australia, slaughter numbers have fallen in Brazil and Argentina as well as domestically. This, teamed with an easing Australian Dollar, averaging 74.25US¢ in July, all pushed prices higher according to the latest co-product report available. A quick look at beef offal export volumes gives plenty of insight on the supply front. Total volumes for the year-to-July were down 40% year-on-year, with the exports in July alone down 91% compared to the previous year. Indonesia and South Korea were Australia’s biggest offal markets by volume over the past 12 months, and they took 25% and 32% less product respectively.

Using the average yield of each major co-product from a 500kg live weight cow, current co-product total returns per head equate to around $281.74. This is an increase of close to $100/head compared to July 2020, and a jump of more than $15 on the previous month. Making up 30% of that total return in July was tallow, which rose $143/tonne on the previous month. At $1723/tonne, tallow (the 1% Free Fatty Acids product) has risen 77% year-on-year, or $750/tonne.  Tallow is commonly exported to Singapore for biofuel production, which links its pricing to the cost of oil – which has also been rising.

Another strong performer has been tongue, which makes up 11% of the total co-product return. The price of tongue (swiss cut) has skyrocketed from $9.48/kg in July 2020, to $26.23/kg this July, a jump of 176% year-on-year. It has climbed 18% month-on-month, and hasn’t reached prices this high since 2005. Tail (7% of total return) is also in hot demand, lifting about $5/kg annually, to reach $15.48 – the highest price in our records going back to 2000. The cost of hides has also risen significantly in the past 12 months, however still remain historically low.

Co-products are well and truly keeping pace with strong beef prices internationally, and no doubt playing a role in maintaining Australia’s historically high cattle prices. This will see them having an increasing role in Australian beef production and export, and the focus on co-products in our domestic industry start to move from cast-offs to money makers – especially if supply remains tight in the medium term. 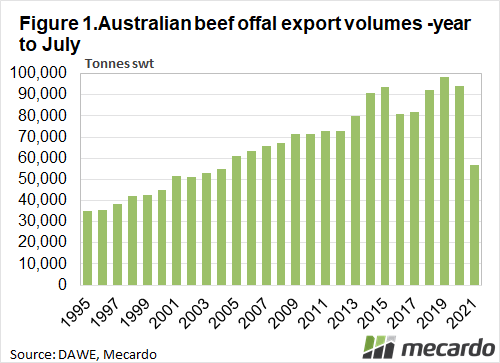 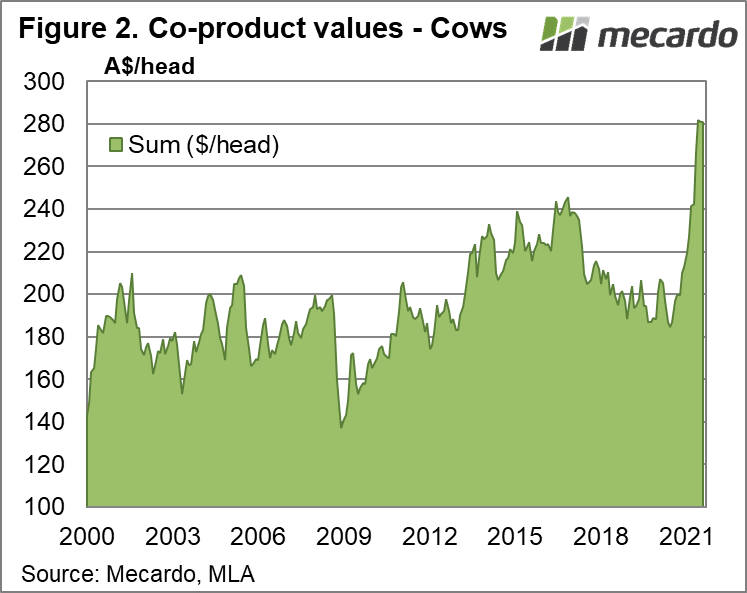