New Zealand is our twin major exporter of sheepmeat and the major producer of carpet wool. With this in mind, this article takes a look at the flock size and sheep meat production in New Zealand.

Mecardo last looked at the major livestock numbers in New Zealand in October 2016, shortly after dairy cattle numbers had peaked. The FAO Dairy Index (view here) still remains some 28% below the peak reached in early 2014.  Figure 1 is an updated graph from the 2016 article, which shows annual estimates of the New Zealand sheep flock (left-hand axis) and the beef and dairy herds (right-hand axis) from 1981 through to 2020 with estimates for 2021 from Beef + Lamb NZ (view here). The dairy herd in New Zealand peaked in 2014, in time with the FAO Dairy Index. Since then, the dairy herd has drifted lower by 7%, the sheep flock has shrunk by 14% and the beef herd has increased by 6%.

Figure 2 compares the dairy herd and sheep flock from 1981 onwards, showing a tight correlation in the change in the numbers of these two enterprises. As dairy cow numbers increased in recent decades the sheep flock shrank. That has been the big trend of the past thirty years but does not explain the continued shrinkage of the flock in recent years. The New Zealand sheep offtake remains near 15%, which means the flock is still in contractionary mode supporting the Beef+Lamb NZ view of the flock shrinking a further 2.3% this season.

All very interesting, but what does this mean to Australian farmers? Figure 3 compares the New Zealand flock size and their total sheep meat (mutton and lamb) production from the early 1980s onwards. As to be expected there is a strong correlation, with sheep meat production trending lower. World supply is an important driver of sheep meat prices relative to other red meats, as it is an internationally traded commodity. Lower supply out of New Zealand, especially in a structural (permanent) sense, is important to Australian farmers as it is supportive of international sheepmeat prices, which in turn are a driver of Australian domestic sheep meat prices.

From a sheep meat supply perspective lower production in New Zealand is supportive of mutton and lamb prices, which is good in the medium term. In the long run, we need a growing industry so suitable talent can be attracted to it and appropriate investments (research and development, on-farm and along the supply chains) can be made. 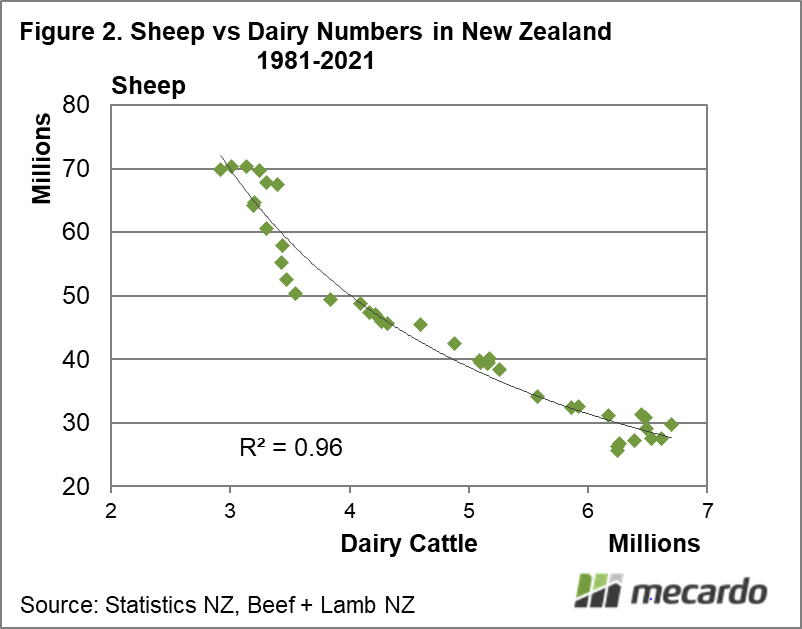 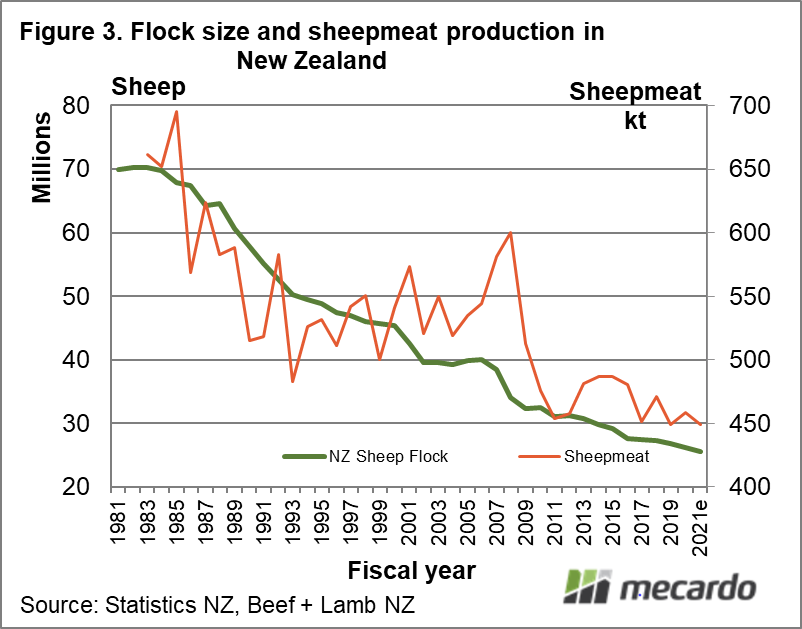