Buyers became more selective with high VM wool and poorly prepared crossbred lots noted over the week as the most effected in a softer market. The market opened on Tuesday weaker but with grower resistance to accept the falling prices reflected in high pass-in rates, as well as further withdrawals of wool from sale, auctions this weak found some support on the final selling day.

Most of the pull back in the market came on the first day with small further price reductions with some types improving on the final selling day. The only exceptions to the across the board falls were the 18 & 16.5 MPG sectors in Melbourne which posted modest gains for the week.

Crossbred types were hardest hit posting 7 to 9% falls, with the 28 MPG losing 52 cents in Melbourne. Skirtings had two days of easing prices with falls recorded of 50 to 60 cents for the week.

Cardings initially fell, however like the fleece types they steadied on Wednesday and at times showed some improvement.

A similar offering to last week of 36,332 bales came forward, after 7.1% of the original offering was withdrawn as growers became aware of the weaker demand this week. With 29,171 bales sold, almost 4,000 fewer than last week, the pass-in rate lifted to 19.7% nationally.

AWEX reports that compared to the corresponding sale of last season, 10,593 bales fewer have gone through the auctions, a 1.8% reduction. Average bales sold for the season to date are sitting at 27,045, up 500 bales per week on last season.

To extend the analysis, Andrew Woods also looked at how wool compares to other fibres when talking about price volatility. Interestingly, wool price volatility is on a par with cotton & polyester staple fibres, however the man-made fibre feedstock prices have had higher price volatilities while the 16 micron wool types have been reducing price volatility since the 1990’s to now sit close to volatility levels in cashmere prices.

Another large offering of 41,527 bales is rostered for next week with all centres selling on both Tuesday & Wednesday.

It is difficult to be optimistic about the market prospects for next week. As we have seen on a regular basis, large volume tests the market so expect to see further grower withdrawals and a high pass-in rate which has the effect of providing support to the market. 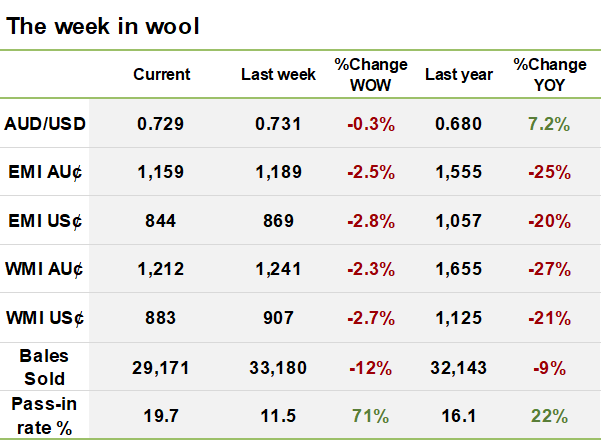