If our federal election tells us anything, it is that people are concerned about climate change. For years, governments around the world have been trying to find the balance between reducing greenhouse gases, and limiting fossil fuel use but not sabotaging their economies that have become reliant on cheap energy sources.

The evolution of biofuels heralded a bold step forward.  Biofuels could be used in isolation or blended with other energy sources to be sustainable and renewable.  The use of ‘food for fuel’ was also a considerable boost for agriculture with the extra demand creating a new ‘floor’ for agricultural prices.

The introduction of biofuels has not been without its detractors.  The added demand for ‘food for fuel’ commodities has increased the prices for end-users and left global end stocks perilously low as consumption has outstripped supply over the past couple of years.

In light of this year’s extraordinary supply-driven rally across food and energy sectors, the decision to keep using food for fuel is coming under the spotlight.

Germany’s environment ministry is working on a proposal to phase out the use of biofuels produced from food and feed crops by 2030 to preserve supplies for human consumption. Instead, the German government is looking to replace plant-based biofuels with green hydrogen and waste oil/animal fat sourced biofuel.

Going forward, we would expect the German approach to be more widely considered by other countries, when we are facing significant food security issues and soaring commodity prices.  Argus Media reports that this potential legislation is copying similar changes in blending mandates reached in Norway, Sweden and Finland, while Belgium is proposing a similar move.  There have recently been rumblings from the White House that corn-based ethanol mandates would also be scrutinised.

If food security isn’t addressed, we are likely to see continued civil unrest in countries where the cost of living is skyrocketing.  This will cause political leaders to make some uncomfortable decisions between meeting greenhouse emission goals versus meeting the basic cost of living goals.

Canada and the US are still building crushing facilities to expand biofuel capabilities for their own domestic requirements. However, with 70% of Europe’s canola imports being used in the biofuel sector, any potential shift to reduce the use of this edible oil in fuel will hit demand and therefore price. 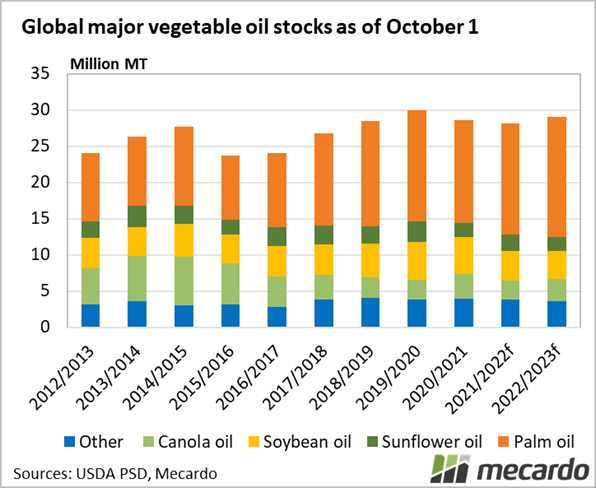