The current tension between Russia and Ukraine has the world watching and speculating. Interested groups include grain producers across the globe. The question is whether anything will actually happen, or if it will all blow over and calm will ensue just like a typical winter snowstorm. Looking back in history at energy prices and Russian military action could provide some guidance towards gauging the real level of risk, which is of interest to grain traders and producers.

Since world war two, Russia and former USSR have instigated several armed conflicts with their neighbours. Daniel Gros, director of the Centre for European Policy Studies looked at the relationship between oil and Russian aggression back in 2015, and we have extended this work to the present day.

Oil and gas are big business in Russia, and a driver of substantial national wealth. High oil prices are generally good for the resource-rich Russian economy, and increase its financial capacity to buy military goods and pay personnel.

If we consider real oil prices in 2021 dollars, (figure 1), we can observe that the peaking of prices in 1979 coincides with the soviet invasion of Afghanistan. This was followed by a protracted period of time where oil prices and soviet oil production decreased, including the collapse of the Soviet Union, and NATO expansion with little Russian opposition. During this time Russia was occupied with numerous internal issues

Rising prices reached a peak again in 2008 culminating with the Russian invasion of Georgia, and similar heady levels were experienced at the time of the annexation of the Ukrainian Crimean Peninsula in 2014.

Fast-forwarding to 2022 and we can see that oil prices have recovered again to over $80 US/barrel, and again, the potential for trouble has reached boiling point, with Russian troops amassing near the Ukrainian border and geopolitical tension bubbling.

If history is any indicator, the risk posed by the Russian military assertiveness in eastern Europe is all too real, compounded by expectations in the market that any conflict eventuating will push the oil price even higher. However, it has to be said that oil prices have not quite yet reached the extremes of $US100+ in real terms that were present when conflicts have broken out in the past.

But when gas is taken into account, the situation looks more precarious. Over 50% of European gas imports come from Russia, and European gas prices have risen an extreme 400% in 2020 alone, currently sitting at an eyewatering $38/GJ. (figure 2) Russia’s Gazprom CEO Alexy Miller Gazprom recently announced that he expects 2021 to be the best financial result in history, and issue record dividends, over 50% of which will go to the Russian government.

Looking back in history, we can see that cross border offensive military actions instigated by the former Soviet Union and Russia tend to occur when oil prices and Russian revenues from hydrocarbon production have reached historical extremes. Oil prices are high currently, but not as excessive as had been reached in previous years. This suggests that while assertive Russian military action actually occurring is a significant risk at present, the risk may be lower than was present in previous instances in history, but exorbitant European gas prices complicate matters.

This is good news for Ukrainians and the world in general, but potentially not as encouraging for grain prices. The real worry is predictions that oil prices will skyrocket if conflict breaks out, meaning we are effectively well within striking distance of the “danger zone”. 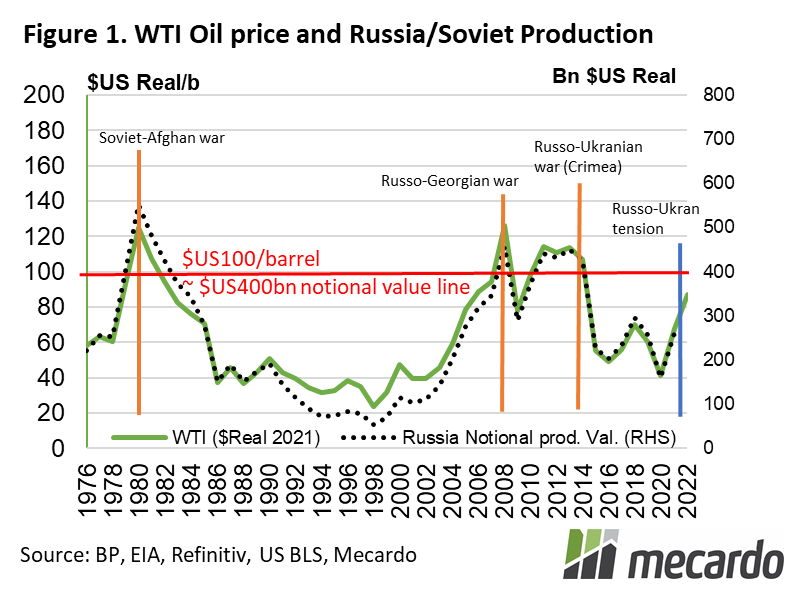