Oilseeds have found a level but volatility remains

Canola and Rapeseed have come off the extreme highs seen back in April, at least in spot futures, but the deferred contracts growers with Canola in the ground are interested in, hit new highs last week.

The initial rally in oilseed prices was due to very tight old crop supplies, and strong demand, with consumers scrambling for the last of the 2020/21 crop to keep them going until new crop hit the market.

The World Agricultural Supply and Demand Estimates (WASDE) data shown in figure 1 suggests oilseed supplies will remain tight. The market thought high prices would have seen some more soybeans in the ground but the USDA Stocks and Acreage Report released last week suggested growers were sticking with initial intentions.

The difference this time is that there is little discount from the spot contract to the Feb22 contract we are interested in. MATIF Rapeseed for Feb 22 sits at 529 euros per tonne, which converts to a huge $852/tonne in our terms.

The market isn’t expecting tight supply to go away until August 2022, after the Northern Hemisphere 2022 crop is harvested.  Even then, the MATIF Futures price quote for Feb 23 currently sits at $695/t, which is well above 2020 values and the long term average.

Locally, new crop Canola prices bounced higher last week, with the Geelong Terminal new crop value back up to $775 per tonne (figure 3).  Other markets are similarly strong, a little cheaper in SA and above $800 in WA.

Basis, or the local discount to the European value, sits at -$75 per tonne if we use Geelong.  Much of Australia’s Canola is now exported to Europe, and as such the discount is generally indicative of freight. Minus $75 is a little extreme a discount, but it would hard to baulk at such record physical prices in favour of swaps.

When prices are at extreme levels volatility is a given, as everyone tries to get ahead of the inevitable decline in values.  The best value hedging is on futures or swaps, but those content with Canola crop progress can do physical without too many concerns.

At such tight supply levels, prices can spike higher with concerns surrounding the crop in the US which still has some way to go.  The same goes for production risk in South America, but the high prices should encourage production, and eventually see prices fall. 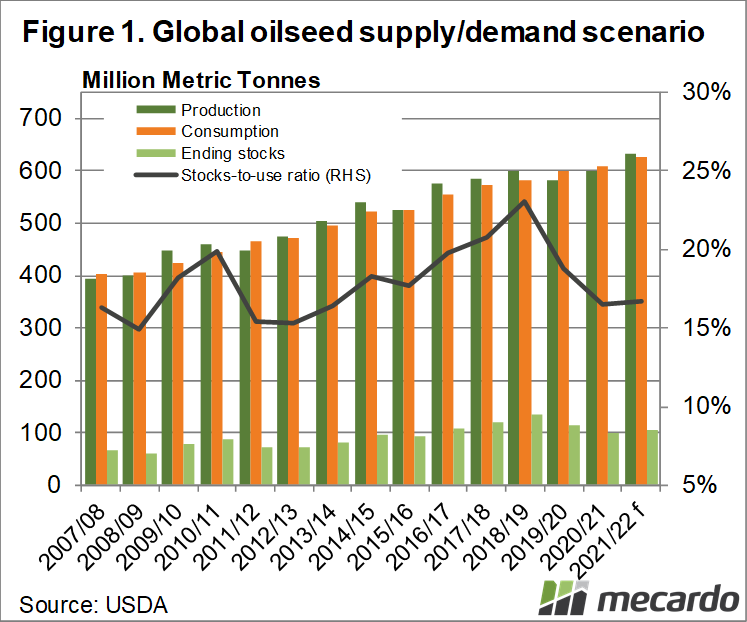 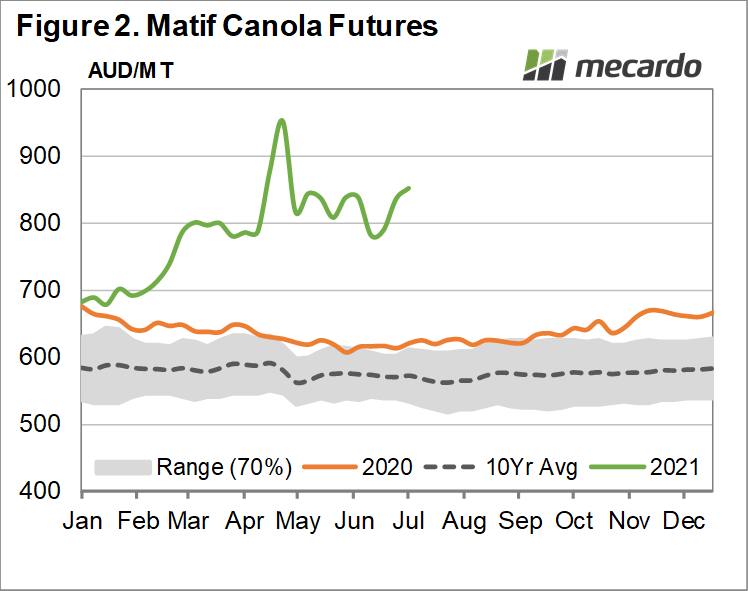