The Eastern Young Cattle Indicator smashed past last week’s record price, adding another 30 cents to close the week at 871¢/kg cwt. This was 59% (323¢) higher than the price was 12 months ago.

Not all categories rode the market higher with young cattle. There was no relief on the pressure of Heavy steers, as they trekked sideways at 375¢/kg lwt. Yearling steers ended the week slightly lower. There was no question of who was driving the young cattle price up, with Restocker steers gaining 44¢ on the week to finish at 556¢/kg LWT. Feeder and medium steers also had healthy rises of 9¢ and 17¢ respectively, with most of the push coming from NSW.

The supply numbers for the week ending the 15th of January, give a good reason for the market strength. While there was a week on week rise in slaughter and yardings, it was still coming off the extremely low base of post-holiday levels. However, with just 17874 cattle yarded on the east coast last week, figures this low are usually only reserved for the first week of the New Year. Total east coast yardings were 65% below the five-year average for this time in the year. South Australia was the only state that filled yards to a level that could be considered ‘normal’.

The diversion from the norm also showed up in the slaughter figures, although not to the same extreme, which explains why slaughter cattle prices didn’t gain as much ground this week. The number of cattle processed lifted 29% on the week but were still 28% below the five-year seasonal average.

Overseas and the 90CL frozen cow price remains firm at 619¢/kg swt in AUD terms. Steiner reported that while Australian supply is limited, it has been steady out of New Zealand.

While the rainfall forecast for the week ahead, isn’t tipping much above average, February is currently looking very wet if you put your faith in the BOM. Despite this, supply will have to ramp up from here, which is likely to see young cattle prices ease from the current extremes. 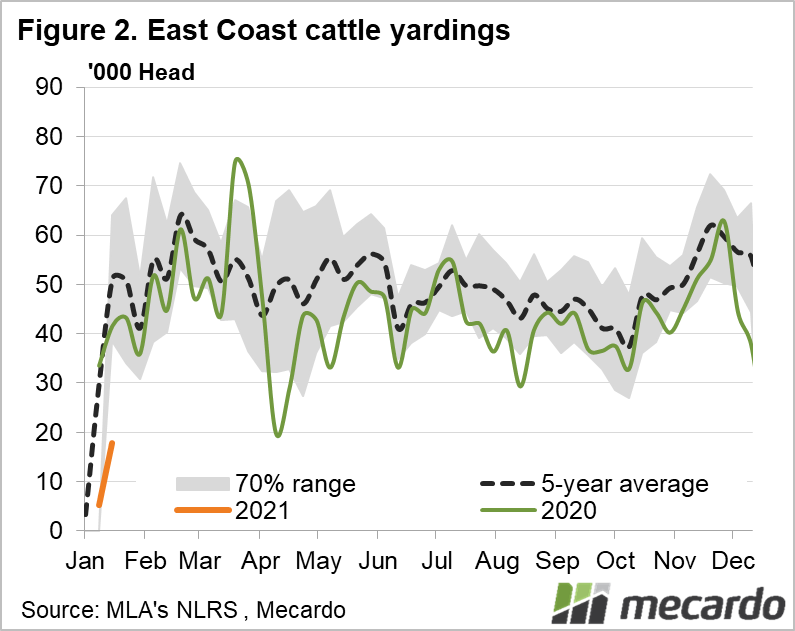 Back in March we took a look at cattle slaughter rates and compared them to where industry projections were pegged. The conclusion was that forecasts

While more records were broken in the West, with the Western Young Cattle Indicator (WYCI) reaching another all-time high, the Eastern States steadied and even

Aussie beef on a roll in South Korea

Tight supply and record-high cattle prices, at a time of out of the ordinary global trade patterns, has prompted some changes to Australia’s beef export