The knock-on impact of the floods has weighed on producer confidence, with yardings in QLD and NSW plummeting last week, but there are early signs that a return to market occurred this week. The pressing problem at the moment though is a sea of beef sitting on the docks and clogging up cold storage all around Brisbane currently, as processors stop work as they wait for logistics to recover.

We’ve got a bit of catching up to do with two weeks of slaughter data being released this week by MLA (due to the impacts of the floods delaying the week prior’s figures).

For the week ending 25/02/22 national cattle slaughter levels were relatively high at 90,466 (compared to the last two years) but still well off the 5-year average by 20-30,000 head. The floods and related logistics issues took their toll however, with slaughter falling 13% last week to 77,385 head.

While the direct impact of the floods on processors has somewhat subsided, logistics problems have emerged, with stocks of chilled and frozen beef building up in ports and cold storage facilities as flow of freight out Brisbane’s main port moves at a snail’s pace. There are now reports that cold storages are filling up, and major processors are cancelling shifts as they struggle to find space to park the finished beef.

East coast yardings plummeted 36% week on week to a total of 30,305 head. The dramatic fall was driven by a huge pullback in offerings coming out of QLD, which were down 12,000 head, or 56% week on week. NSW and VIC producers also held back cattle from market, with yardings down 18% in both states. This week’s EYCI yardings lifted 21% 10,590 head though, so we can expect a rebound in supply being reflected in the data release next week.

On the national categories, there was mostly red ink on the board, with restocker and feeder steer prices drifting south, however medium and processor steer prices posted modest gains.

Supply of restocker steers was 34% higher than the prior week, at 1,327 eligible cattle within the index, which may have weighed on prices, with yearlings at Dalby recovering from only marketing a few head last week to representing 30% of the index this week.

The US frozen cow 90CL price has slipped 2¢ (<1%) in US dollar terms, to 305¢US/lb and in Australian dollar terms, dropped  20¢ (-2%) to 919¢/kg swt, with the appreciation in the AUD a significant factor. Steiner reports that the turmoil in commodity markets has caused imported meat buyers to move to the sidelines for the time being as they reassess their strategies, making traded volumes even thinner than usual.  This brought some sellers out of the woodwork, causing prices to be trimmed slightly.

We’ve seen early signals that cattle are returning to market this week, and that demand for young cattle is still solid despite the disruption that the floods have caused. All eyes are on the port of Brisbane though, and a return to normal service as without it, northern demand for finished cattle could be constrained. 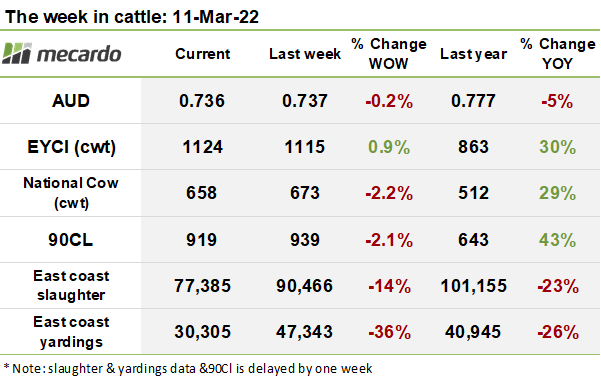 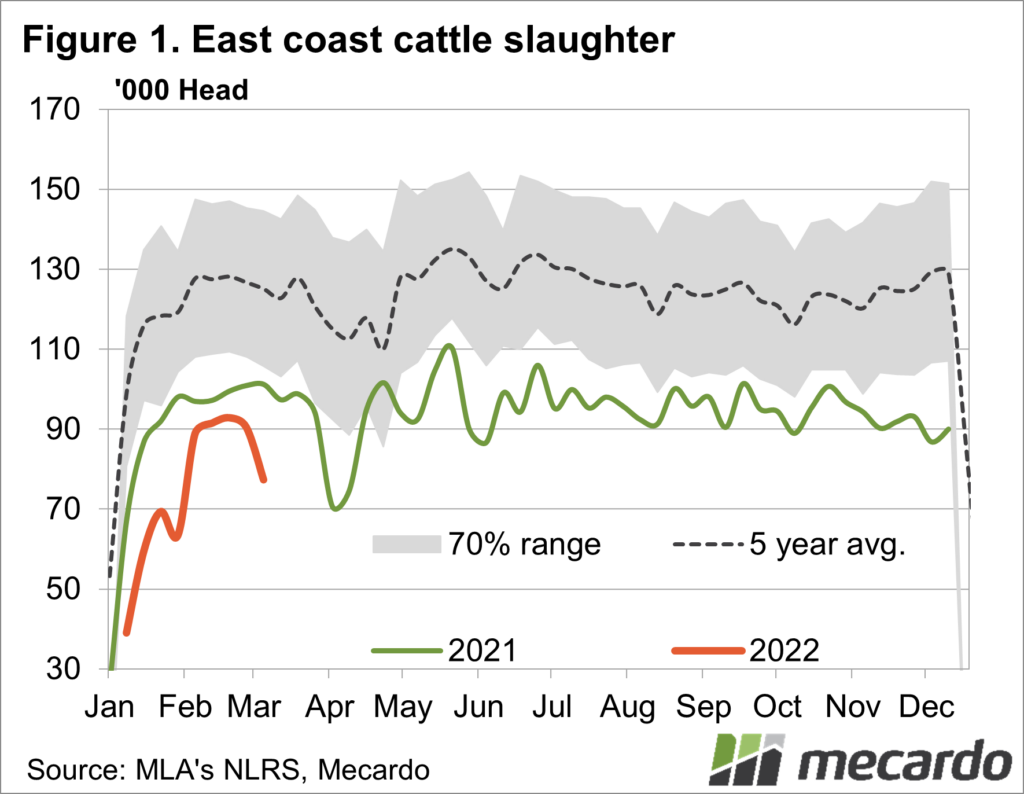