It doesn’t matter where you are looking to buy beef, be it for the barbeque or to put back in the paddock, prices climbed for the June to September quarter. And the price divide between the two narrowed back to near record lows of just above 200 per cent.

The retail beef price rose 57¢/kg in the three months ending September, to 2235¢/kg. This is the highest recorded level, according to ABARES data, surpassing the previous record set in the January-March quarter of this year by more than 30¢/kg. The beef cattle price also rose, which will come as no surprise for anyone either side of a sale this spring, with the national trade steer indicator averaging 738¢/kg for the same quarter – up 24¢/kg. More up to date retail pricing isn’t available, but the cattle price has jumped significantly again this quarter, averaging 775¢/kg.

The price-gap tightened 2% this quarter (the retail beef price climbed 2.6%), putting retail beef at a 203% premium over the cattle market – a gap that has only been closer at one period of time in the last twenty years, and that was during the last young cattle price surge in 2016. This period shared a lot of similarities with the current conditions. The Eastern Young Cattle Indicator averaged 27% higher in 2016 than 2015 and was nearly 50% above the then five-year average. In 2020, the EYCI closed last week at a record 829¢/kg, which was 62% above year ago levels.

The previous record run was cause by much the same factors as this one – the seasonal conditions had markedly improved and supply was tight. The end to the 2016 run came when the rainfall tap got turned off. This time the industry is coming out of an arguably harder drought, and the historically high cattle prices, even during the dry, has given producers added confidence.

It should be safe to say the retail-cattle price gap will tighten further this quarter, as saleyard prices keep climbing. They will no doubt start to soften slightly as the festive season processor shutdowns kick in, but this isn’t likely to put too much of a dent in the pricing for the year, with only a few weeks to go. There could also be more consumer pressure on the retail cost if economic uncertainty and downturn from the pandemic starts to play a bigger role in consumption trends in Australia. However, with export demand where it is, and the rain still falling in the south east, the price gap could become the tightest we’ve seen before long. 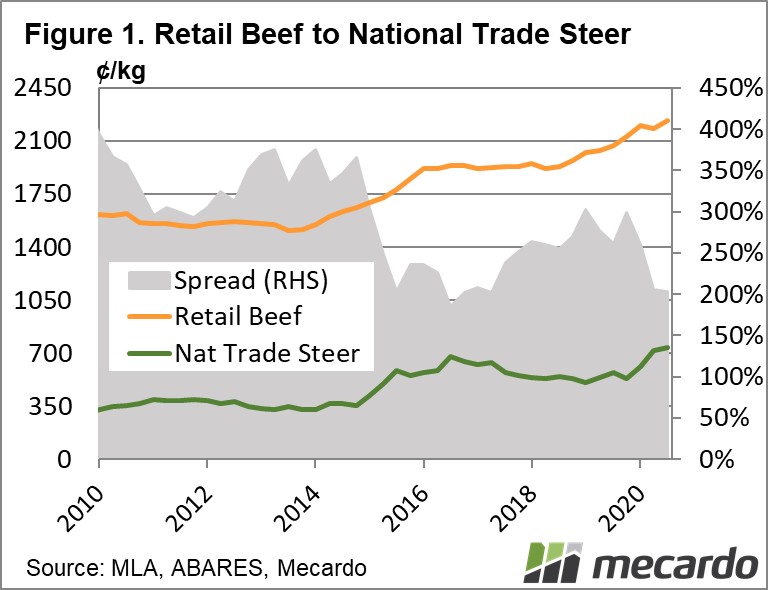 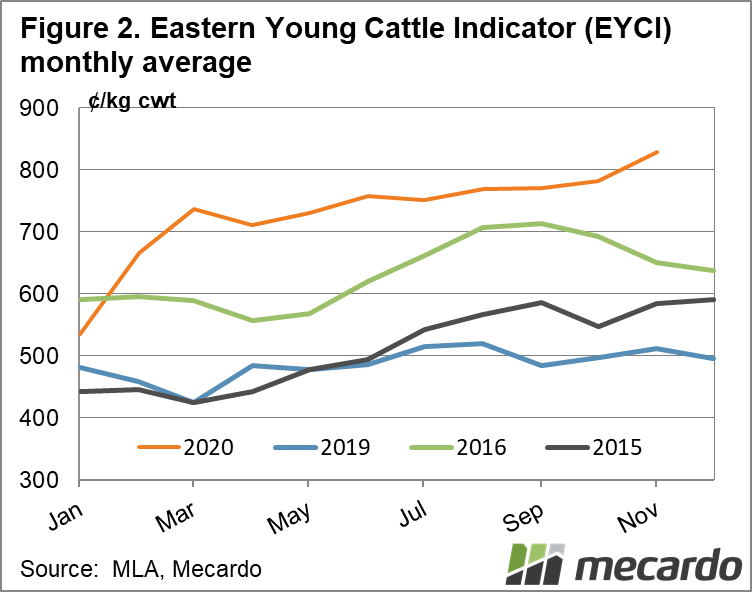