Plenty of profit left in lamb

It’s peak sucker season in the east, and yet we are seeing few headlines about the returns they are achieving. Sure, after lamb prices broke a number of saleyard records last year despite the drought, it may be time for cattle to shine, with the Eastern Young Cattle Indicator hitting new highs again this week. But historically, young lamb prices are proving pretty resilient, having bounced back to year-ago levels, and now sitting comfortably above the five-year average.

Meat and Livestock Australia’s latest sheep industry update, released at the start of the month, described the impact a good season had across many sheep breeding areas on winter trade, as lambs reached heavier weights and were able to be turned off quicker. The National Trade Lamb Indicator lost nearly 280¢/kg from the start of June to late August, before starting to climb back up at the start of September. The National Heavy Lamb Indicator followed the same pattern, dropping more than 300¢/kg in winter before picking back up as spring hit. This change in price pattern – with winter usually being a time of increasing indicators – was also no doubt COVID impacted as processors slowed down and future export demand was questioned.

But despite the lack of hype around lamb prices, it’s still a pretty good time to have fat lambs in the paddock. As of Tuesday, the NTLI was sitting at 773¢/kg, an increase of 16¢/kg year-on-year and significantly higher than the five-year average for the same week, of 611¢/kg. If we use the middle figure of 20kg carcass weight in that grid, that’s a gross return of nearly $155. It climbs to $170 if we use the heavier end weight of 22kg – which many lambs are reaching (or surpassing) in areas where the season has been outstanding. Sure, it’s a long way from the 900¢/kg the indicator hit at the start of June, but so is throughput – having increased by about 150,000 head a week.

If we look at the Eastern States Trade Lamb Indicator it has also climbed this week, perhaps as supply starts to slow slightly in central NSW and the flush from Western Victoria has yet to hit in full force. Finishing Tuesday at 782¢/kg, up 20¢/kg on the same time last year. Why else are prices finding firmer footing? Well things are looking up in terms of slaughter capacity in Victoria, mutton sheep for slaughter are getting harder and harder to find, and strong export figures last month may have reminded us that global turndown or not, the world loves Aussie lamb.

Both the national and eastern states indicators have trade lambs trading higher year-on-year, and at a premium of about 20¢/kg over heavy lamb prices. This is despite Australian-wide lamb yardings being higher than 2019 for the past three weeks. There’s still plenty of lambs to come out of Victoria, which will no doubt push prices back down, but if you’ve got prime suckers in the paddock, now might be a good time to get them on the truck. 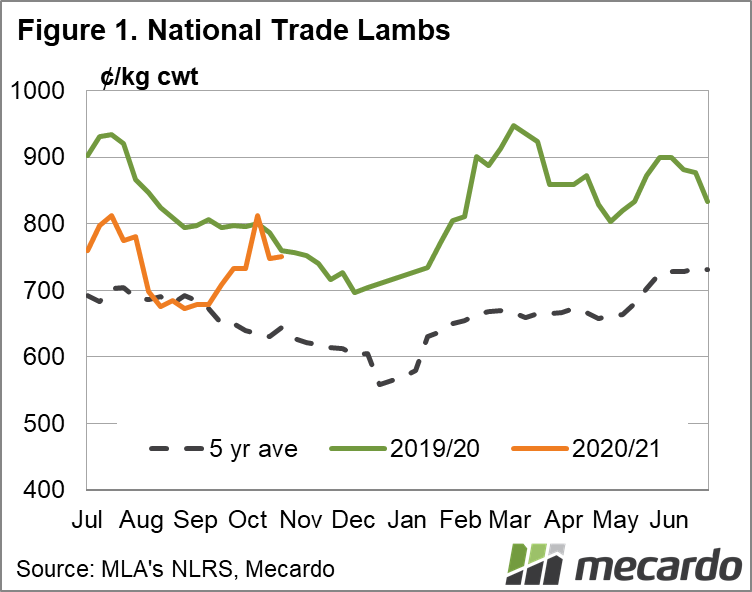 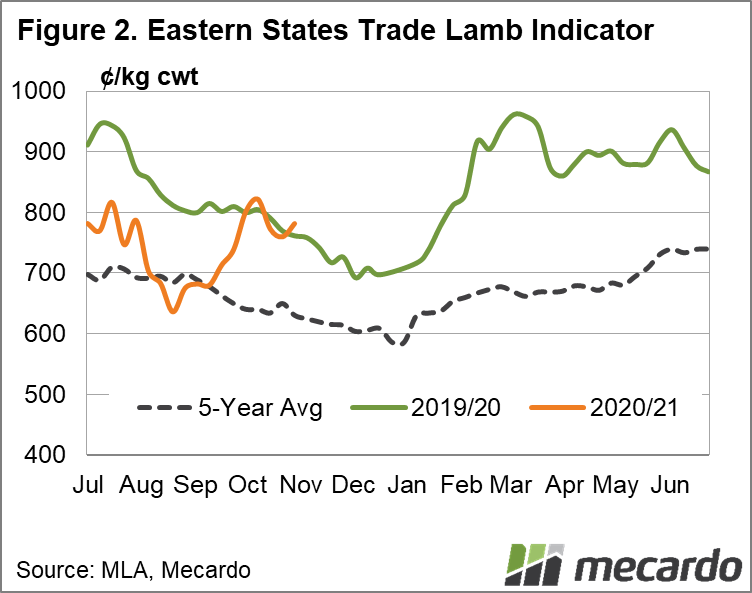