Positive news all round

One quick way to check on the wool market is to look at the pass-in rate. This week it was 2.7% nationally; the last time it was at this level was in August 2018, with a very different market in play. With a strong start to the week, by the end of selling on Wednesday the EMI had posted the largest weekly lift both in cents & percentage terms since September last year.

This week on Mecardo, Andrew Woods had a close look at the discount tender wool (low staple strength) receives compared to the price for fleece with staple strength of 35 N/ktx, looking at the period from September 2000 to this month (to date). Twenty years ago, low staple strength was punished with massive discounts in the order of 35% to 45% in fine merino fleece. The discounts trended lower from then to around 2015, and have been relatively stable since then with maximum levels around 10-12%.

For 17-micron fleece wool the discount over the past 10 years has been greater for 97% of the time, while for the 20 micron it has experienced larger discounts for 94% of the time.

This is particularly relevant to wool producers who were impacted by the drought, with the break in the drought producing abundant feed but also causing a break in the wool in many clips.

It’s not often you see 100 cent plus price improvements in a week, but this was the case in all centres and for all Merino indicators, with the exception of the 19 + 20 MPG in W.A. that lifted a respectable 99 & 94 cents respectively. This lifted all MPG’s above the 1,000-cent mark.

The crossbred section recorded rises but more circumspect than the Merino section, posting 17 to 45 cent increases.

Cardings in all centres were also much dearer with a 50, 64 & 70 cent lift in Sydney, Melbourne & Fremantle respectively, taking all centre indicators above 700 cents.

The next three weeks the offering lifts to around 30,000 per week, which would have proved daunting a couple of weeks ago.

After this week’s market performance, and with the Au$ down to sit at close on US$0.70, the wool market now considers a fourth straight week of rising prices. 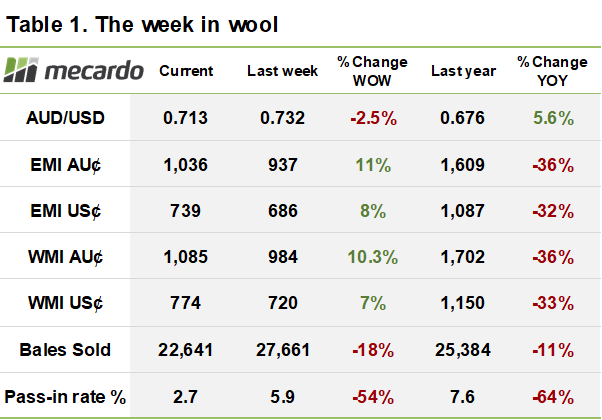 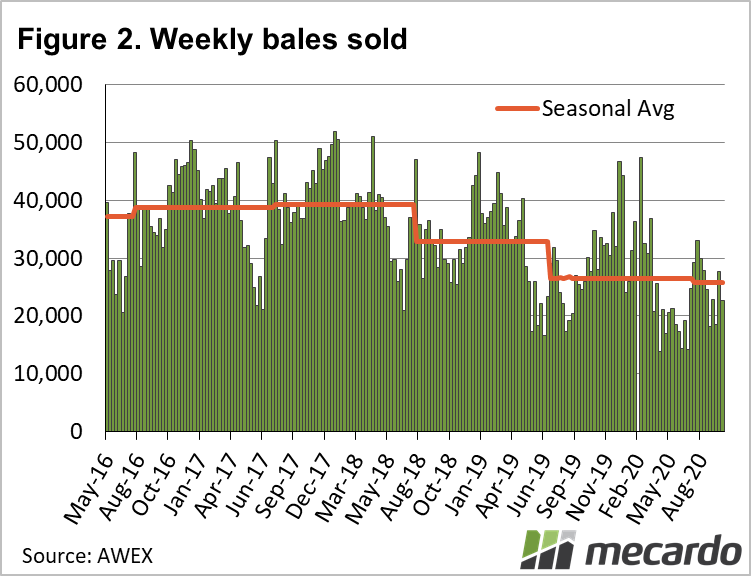