The winning combination of increasing supply and higher prices points to the lift in competitive spirit for lamb markets. This weeks’ cross-category price rises pushed the market Indicators back above month-ago levels, signalling that the plummeting prices we saw in August was an overcorrection.

East coast throughput for the week ending the 11th of September was slightly lower on the week prior. 10% less lambs were yarded, driven by large falls in NSW that weren’t offset by greater volumes in Victoria, South Australia and Tasmania. The total east coast lamb numbers were still 8% higher than the same week last year though.

Sheep throughput is still trailing well below average levels, despite a slight lift on the week.  As noted by Jamie-Lee on Mecardo this week (view here), more sheep sales appear to be directed online with AuctionsPlus currently reporting record offerings.

It looks like things are on the up in Victoria, and that includes slaughter volumes. 18% more lambs and 47% more sheep were processed in the state last week compared to the week prior.  The weekly East coast slaughter tallies ended 11% and 8% higher for lamb and sheep respectively.

The Eastern States Trade Lamb Indicator found an extra 30¢ this week, moving back into the 700¢/kg cwt territory. The eastern market was stronger for all types of lambs. Heavy Lambs gained 31¢ to end at 679¢/kg cwt. Restocker, Merino and Light lamb Indicators all rose around 20 to 25¢. The largest gains were made in Victoria.

Over in the West, results were more of a mixed bag.  The spread between east and west trade lambs extended further as the Western Australian Trade Lamb Indicator dropped 20¢ to 579¢/kg cwt. WA Restocker lambs did claw back some ground, with an 86¢ lift to 606¢/kg cwt.

The lamb and sheep market has been much more responsive to news than normal over the past few months. The easing of restrictions in regional Vic, reopening of restaurants and plans for an Al Fresco dining scene will hopefully add optimism for additional domestic demand for lamb. 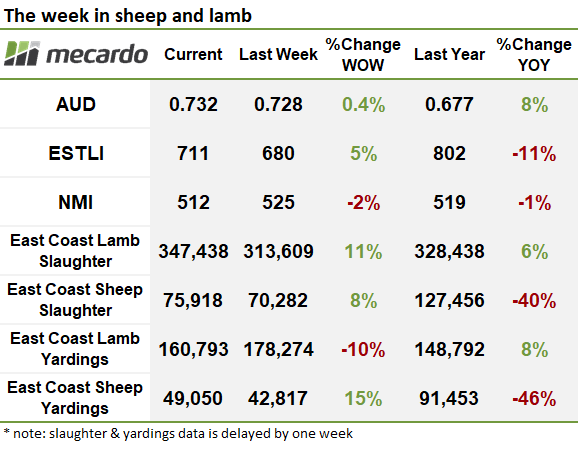