Positivity reigns, but no love for heavy steers

Optimism has reigned this week, with slaughter up and all categories apart from heavy steers putting on good advances, but somehow the EYCI only managed to lift a single measly cent. Sadly, the Aussie dollar has bounced back up to almost the 72c US mark, but the US export indicator, the 90CL benchmark, has held its ground despite this.

East coast yarding’s fell another 1% from last week’s level, but it was a story of contrasts; where NSW producers held onto their stock, with yardings tumbling a whopping 23%. In contrast, other states lifted, with VIC jumping 21%, followed by QLD, gaining 10%. Overall, yardings decreasing by a total of 245 head (1%) on last week saw 36,502 cattle yarded on the east coast for the week ending 28th September. This level is 24% below last year.

Slaughter numbers increased 8% from last week, which was a nice rebound from last week’s sharp fall. QLD numbers drove the increase, putting on 14%, followed by VIC, which lifted a healthy 9%. A total of 108,352 cattle were processed, which is down 27% compared to the same time in 2019.

The EYCI inched up marginally, adding on a single cent (1.3%) to settle at 776¢/Kg cwt, still at a level 58% above last year. Pretty much all green ink on the board this week for the categories, with restockers finding their feet again, and feeders finally finding some decent upward traction, but there was no love for heavy steers this week.

On a less positive note, heavy steers took a tumble, giving back last week’s gains and more; losing 14¢ (4%) for the week to close the week at 363¢/kg lwt.

The Aussie dollar posted a strong recovery from last week’s heavy fall, climbing 2.2% to settle at 0.718 US dollars yesterday. The week’s trading reached a peak of over 72¢, but the market seems more subdued today, displaying a downward trend – so we might see the dollar come back a bit by next week.  Meanwhile in America, the 90CL Frozen Cow price remained relatively stable at 662¢/ kg, barely moving from last week despite the improvement in the AUD.

The rainfall forecast for the coming week is a bit more pleasingly damp across the east coast than last week, with more of NSW and QLD due to get a sprinkling. La Niña has also been officially called and as always; it can be expected that this will continue to stoke restocker demand. This week’s countertrend fall in the heavy steer price though could be signalling the start of a slight subsidence in export beef demand and will be an area to watch carefully for a repeat next week. 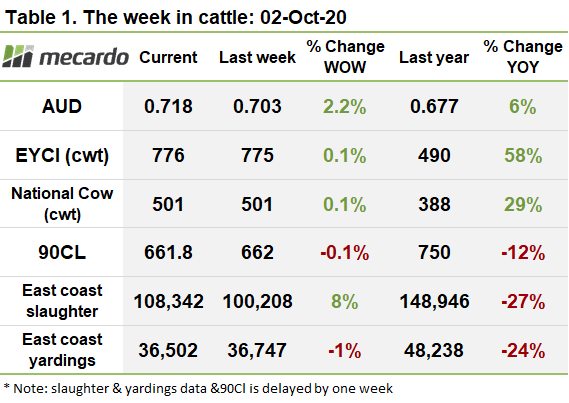 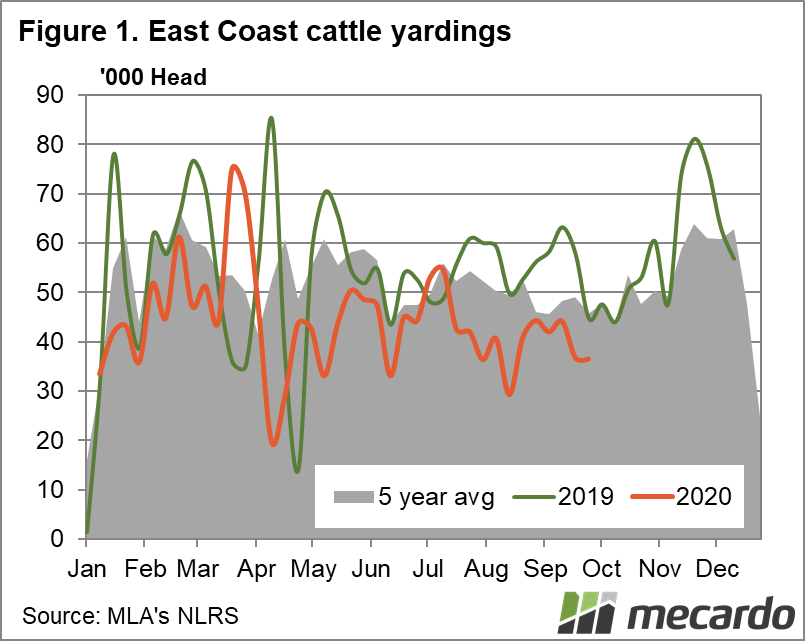