The sensitivity of the wool market to China, and the nervousness around global markets was emphasized at this week’s auctions. Reported factory closures on the back of power shortages in China reverberated into the wool auction rooms as buyers lost confidence and pulled back prices on the news that processors were closing under government direction to limit power use.

While overall the market lost ground for the week reflected in a 31ȼ fall on the EMI, the second and final day of selling was “steady” with the merino types showing little movement and the EMI gaining 1ȼ.

The merino fleece Micron Price Guides (MPGs) posted losses in all categories this week of between 2 & 64ȼ. In Melbourne the least affected was the 18.5 MPG & finer losing on average 25ȼ, although the exception was the 17 MPG which fell 61ȼ. Medium types all lost 34 to 64ȼ, with the 21 MPG down 64ȼ the worst result.

Cardings were cheaper in all centres, Fremantle was down 23ȼ, while in Melbourne the indicator fell 12ȼ and 9ȼ in Sydney.

This week on Mecardo (view article here), Andrew Woods looks at what has been happening in the wider apparel fibre markets. Looking backwards over the past year, the recovery in apparel fibre prices looks to be a solid one. This is good news for merino prices, but no solace for crossbred prices.

Next week Fremantle, Melbourne & Sydney are all selling on Wednesday & Thursday, with a slightly larger offering of 42,119 bales currently rostered. 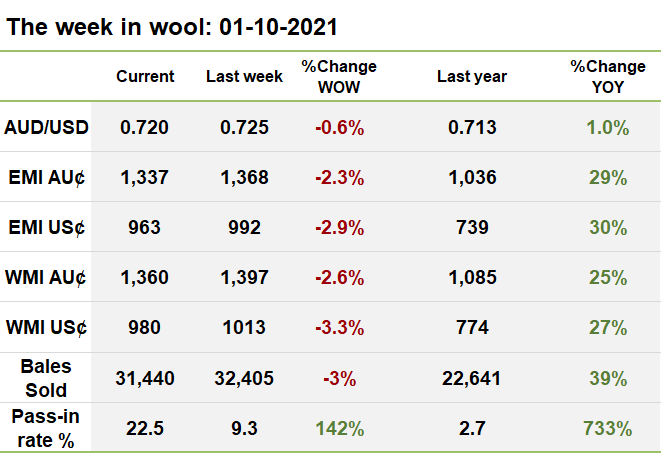