Conditions for the wool market have been anything but usual in recent years with a widespread, extended drought and a boom market which peaked in 2018 and has since weakened, now given an extra boost downwards by COVID-19. In addition the South African market was closed in early 2019 due to a foot and mouth outbreak and has been closed again for the past month due to COVD-19 lockdowns. The South African market is important for shorter length, broader merino wool as they are the main suppliers of these categories.

Figure 1 shows the proportion of 50-69 mm length fleece for 19.5 micron wool (quarterly or 3 month intervals) from 2007 to this month using the left hand axis. In addition the discount for 56-60 mm length fleece wool (without any subjective faults) is shown, using the right hand axis. Through to 2015 the proportion of shorter length 19.5 micron fleece ranged between 6% and 8%. Since then it has risen to range between 15% and 25%, although in 2020 the change in proportion has steadied. The accompanying discount has increased slightly since 2015.

Figure 2 repeats the exercise for 21 micron wool. For the 21 micron category the proportion of short wool has risen markedly since 2015. Unfortunately since early 2018 the supply of broader merino wool has been under extreme pressure due to drought, reducing the ability to easily generate premiums and discounts for short staple wool.

In Figure 3 the exercise is repeated again for 22.6 micron merino wool. The proportion of short staple wool has risen to levels ranging between 15% and 40%. A different series is used to look at the shorter staple discount. In this figure, quarterly average prices for 58-63 mm length merino fleece are used (with less filtering for fault). The discount lifted from low levels in 2015, and during the current season has rocketed upwards. Caution needs to be exercised with these discounts as the extreme shortage of full length 22-23 micron merino fleece has been strong enough to push the micron curve into inversion (22 micron above 21 micron prices).M

A lack of South African wool should be positive for shorter length merino fleece discounts. Make a note that this South African wool will be building as grower held stocks and will come onto the market when lockdowns are lifted, potentially pressuring shorter length discounts to increase. For the very broad end of the merino distribution, low overall supply combined with a high proportion of prem wool means has widened the discount markedly. The situation for 19.5 micron wool in terms of prem wool supply and applicable discounts is relatively unchanged on recent years. 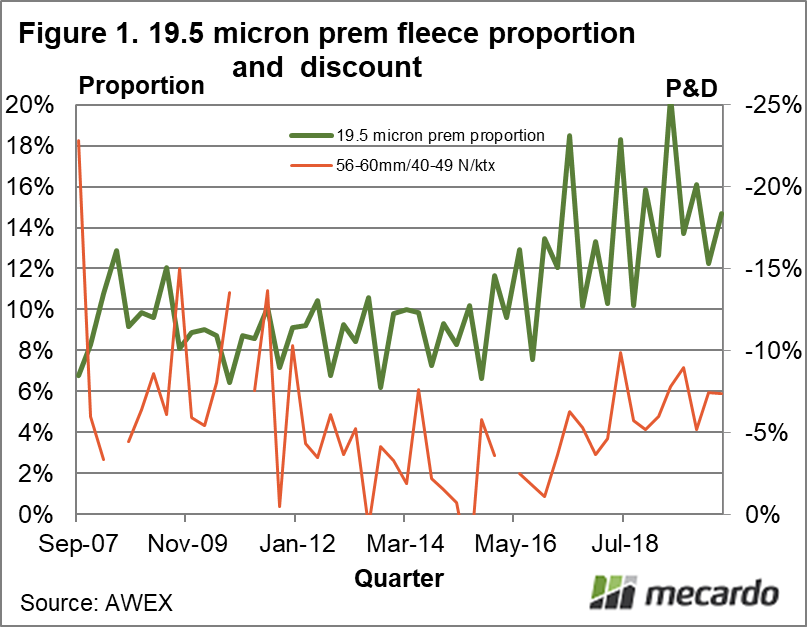