The lamb market took its second hit for spring this week, with large price falls for finished lambs. Supply continues to move erratically, with producers responding to any weakness in the market and many processors challenged to plan by the current environment.

The appetite for restocker lambs was weaker in all states and the National Restocker Indicator dropped 25¢/kg cwt to 935¢/kg cwt. Heavy lambs ended the week 47¢ lower at 852¢/kg cwt. Light lambs and Merinos were best supported but still fell 1¢ and 7¢ respectively.

Sheep prices improved in the West which helped lift the National Mutton Indicator 6¢ higher to 615¢/kg cwt. Mutton is cheaper than the same time last year in all eastern states, but in WA producers are fetching an additional 70¢ compared to 12 months ago.

Sheep slaughter lifted last week, and it looks as though sheep are taking up some space on the kill floor from lambs. East coast lamb slaughter has been zig-zagging for about six weeks now, and last week was a zag. Lamb slaughter dropped 10% on the week prior, 21% below five-year average levels.

Eas coast lamb throughput also dropped 10% last week to see 193,099 lambs yarded. All states in the east contributed to the fall. The total number of lambs yarded last week was slightly above average levels, largely driven by strong throughput in NSW which is making up for lower than average supply in Victoria. It was a different story in the West though, where extra supply flowed through to a 49% jump in lamb yardings.

It was a light week for sheep yardings as well with just 65,147 head yarded in the east. This was a 30% drop on the week prior, and 25% below the same time last year.

It won’t be long now before lambs south of the divide start to flow which will really test Victoria’s processing capacity. We might see some producers hold back lambs again next week and entice a bounce but there’s likely still downside ahead of us. 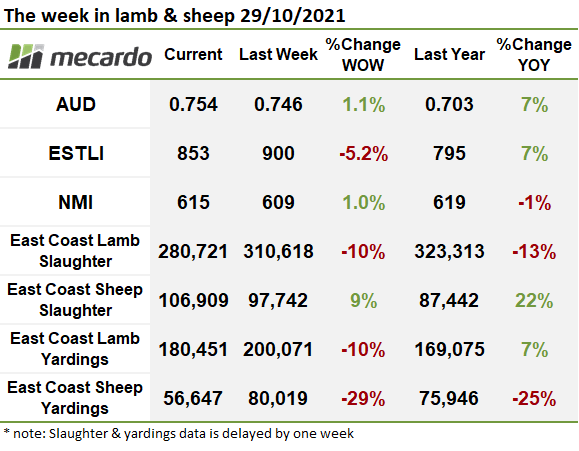