Price unshaken by an influx at the yards

It was a steady week for lamb prices, despite an impressive jump in yardings last week, supply seems to be matching demand. Mutton prices made a move upwards however, particularly in Victoria where the market was generally stronger.

Lamb returned to yards in leaps and bounds in the week ending the 5th of February 2021. Compared to the shortened Australia day week, east coast lamb yardings were 140% higher. With 245,441 head yarded, this was the highest yarding for this time of the year that we have on record (27% above the five-year seasonal average).

Victoria and South Australia were responsible for much of the spike, where the number of lambs yarded was 71% above the five-year average in VIC and 63% above in SA.

While the lift in sheep yardings week on week was also significant, last weeks tally was still 11% below the five-year seasonal average. Some more kill space opened up for mutton last week and prices this week are reflective of that stronger demand. The National Mutton Indicator gained 26¢ to sit at 633¢/kg cwt. In Victoria mutton was 44¢ dearer by the end of the week with the indicator at 655¢/kg cwt, which is just below NSW at 657¢/kg cwt.

The Eastern States Trade Lamb Indicator tracked sideways, down just 1¢ to 847¢/kg cwt. Heavy and light lambs each gained 6¢ on the week while re-stocker lambs were fairly steady.

We touched on lamb export demand earlier in the week and the below average volumes in January (view here). With the dollar appreciating another 1% this week, it certainly isn’t doing any favours for our export markets. The ESTLI in USD is 657¢/kg cwt which is 7% higher than the same time last year.

Lamb prices have been quite steady for a few weeks now, and it appears that even the swings in yardings aren’t shifting the price level of the market. 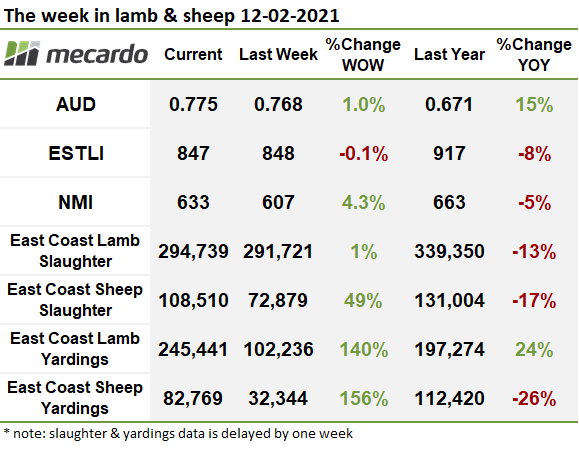 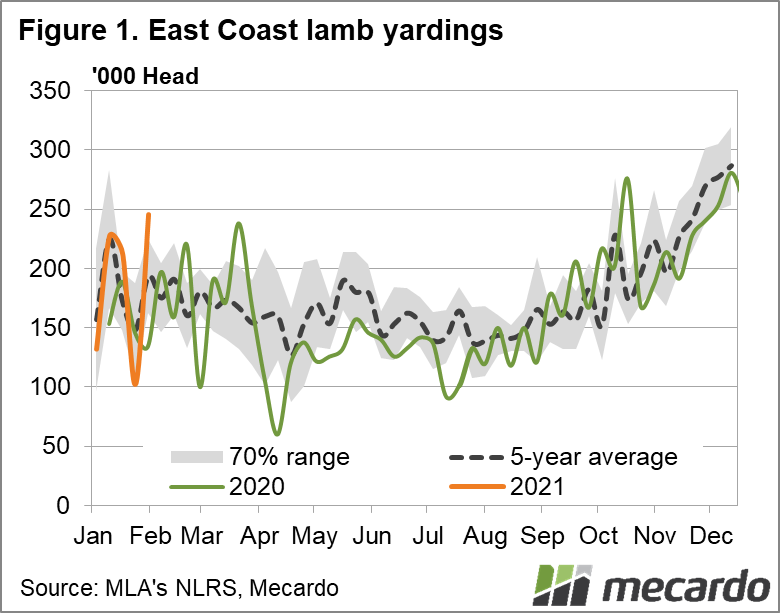