Price volatility has been on show in the wool market in recent months with sharp price movements from day to day which are even catching exporters by surprise. This article takes a look at recent volatility and compares it to the market of the past 40 years.

Price volatility is the change in price levels. There are various ways to summarise changes in price. In this article, Mecardo has borrowed from the IMF (via the RBA) the following method. Price volatility in this article is measured as the standard deviation of month on month percentage changes over rolling 12 month periods. To put this in some context consider Figure 1. In Figure the month to month changes in the price of the average merino micron (AMM) are shown in bars. The late 1980s and early 1990s stand out as the period of greatest variation in the bars. The AMM is used as it keeps the price focussed on the middle of the Merino supply, avoiding the effect of supply and premiums/discounts which impact on say the 19 or 21 micron categories because of the change in the Australian wool clip through time.

In Figure 3 volatility is shown for the AMM again, as well as the series two microns finer and the series two micron broader. In today’s market, this represents the 17, 19 and 21 micron categories. In 1989 these three series would have been 20, 22 and 24 micron. The idea in Figure 3 to compare the fine, medium and broad merino price volatilities where fine, medium and broad are defined by the actual supply of merino. It is no surprise that the fine merino series has had higher levels of volatility. However, on closer inspection the higher levels of price volatility were mainly concentrated in the 1990s through to 2002, when stocks of medium and broad merino wool helped to dampen the price levels for the medium/broader merino categories. Since 2003 the price volatilities of the three Merino series have been similar.

Price volatility is often seen as a curse by wool growers. They would like prices to plateau out at high levels and stay there. The buy side of the market has a different view, certainly of where prices are attractive, and the traders in between (who supply a lot of trading capital required to fund the supply chain) like some volatility but not too much. It is no surprise current volatility levels are at decade/s highs. It is interesting that cardings have tended to be more volatile in recent decades – this warrants a closer look at price volatilities for shorter (prem) length wool. It is also a surprise to see little difference in the price volatility between fine, medium and broad merino during the past 15-17 years. 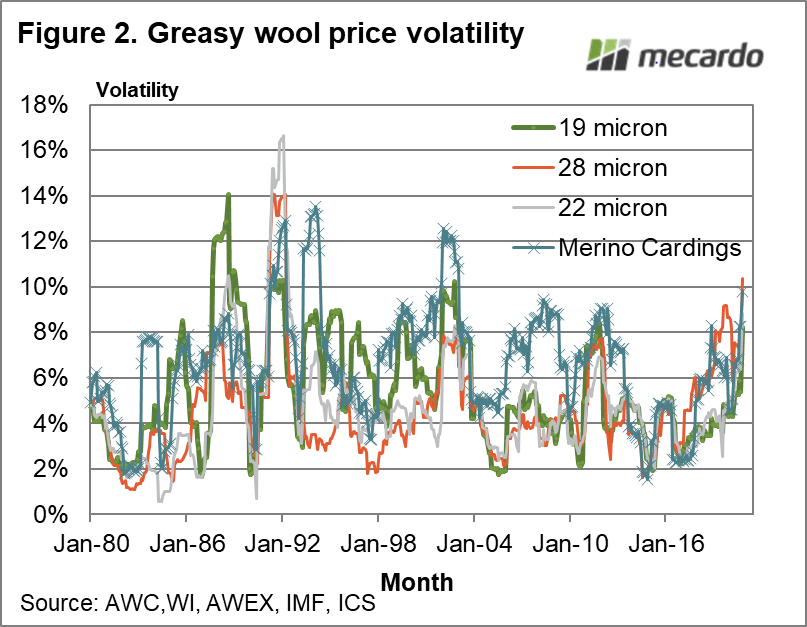