Prices down, pass-in rate up

The wool market has ended it’s positive run this week with almost all Merino types finishing lower than the week previous. AWEX noted that last week’s strong prices enticed another big offering but buyers were more selective in their purchases this time round, resulting in the deflated prices almost entirely across the board.

The market dropped across most of the microns this week with falls between 5 to 65¢ recorded across the 16 to 21 MPG’s. Melbourne fell the hardest in the finer micron categories, with the 16.5 MPG dropping 50¢ to finish the week at 2,238¢, which is still higher than this time last year when it was at 2,169¢ and still above the five-year average for this category of 1,926¢.

While all of the finer microns fell, in a reversal of previous weeks, crossbreds finished the week positive across the board with lifts between 4 and 35¢.

As mentioned earlier, the AUD was stronger over the week again, lifting 2.7% on last week to settle at US$0.7963 for the selling week. At this level, the AUD is sitting 21.2% higher than this time last year when it was US$0.6547 which helps explain the high EMI in USD terms we have seen recently.

Again, we saw a solid clearance of bales to the trade this week. AWEX reported that 50,138 bales were offered this week, 4.8% withdrawn and 18.4% passed-in, resulting in 40,908 bales sold. Clearances continue to trend well above the average clearance season to date of 31,613 bales.

This week on Mecardo, Andrew woods took a look at queensland wool production in two separate articles from the early 1990’s to the present. While we have seen a significant decline in the Queensland sheep herd size, the most recent numbers show that the sheep flock is growing.

Another big offering of 50,535  bales is lined up for next week but we can expect to see some hesitant growers reduce their offering based on the falling market this week and possibly another high pass-in rate depending on the outcome. 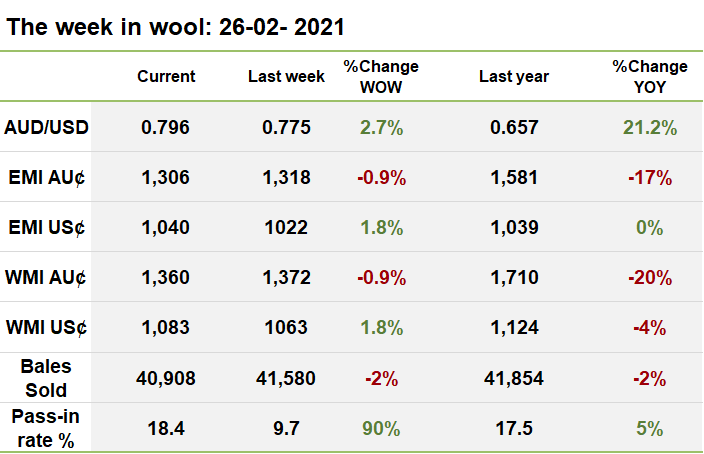 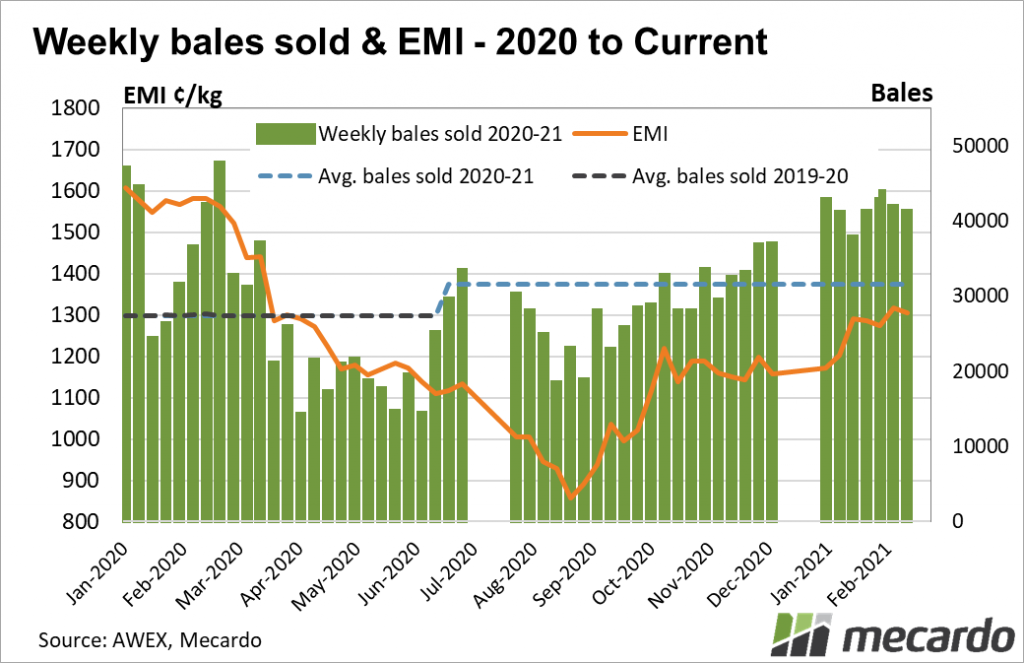