As nice as weeks of extremely tight supply are for price, they don’t last forever. Higher flows of lamb and sheep to the yards has seen the market correct in all eastern states, while recent rain in WA boosted confidence and price.

For the week ending the 9th of April 142,007 lambs were yarded in eastern saleyards. This was a 17% lift on the short-selling week at the back end of Easter, but still 11% below the five-year average. The only state not contributing to an increase in throughput was South Australia, where yarding’s were 37% lower than the week prior.

Sheep also jumped back into the yards, with east coast numbers tallying to 43,706 last week. While this was a 52% gain on the week prior, it’s still 30% under the seasonal average.

This week on Mecardo Angus Brown looked at the supply and price spreads between states (view here), noting that we could be seeing a period where lambs are being offloaded in NSW, as finished lambs are sold to make room for sowing crops. NSW yarding’s don’t look like much compared to the five-year average (-20%) but just taking the last three weeks, NSW throughput has been 42% higher than the same period last year.

The Eastern States Trade Lamb Indicator (ESTLI) lost 26¢ to end the week at 816¢/kg cwt. Falls in the east coast markets were widespread across states and categories. Light lambs and Merino lambs in Victoria lost 76 and 64¢ respectively, while the falls were more modest in Trade and Heavy lambs. In NSW all lamb categories ended this week 10 to 20¢ lower, and in SA it was Restockers that took the largest tumble, down 99¢ to 926.

On a brighter note, recent gains in Western Australia continued this week. The Western Australian Trade Lamb Indicator lifted 23¢/kg cwt to 753¢/kg cwt, which places it at an 8% discount to the ESTLI.

Mutton didn’t hold onto last week’s gains in the east, resulting in the National Mutton Indicator shedding 40¢. However, in the West, Mutton gained 18¢ to 575¢/kg cwt.

Normally a week of stronger yarding’s, which sees price fall, is followed by much weaker yarding’s as growers hold onto lambs and wait and see if prices might reverse. With the Autumn break delivering reasonable to best-ever conditions to sheep regions, there should be plenty of confidence to hold and pick your timing. 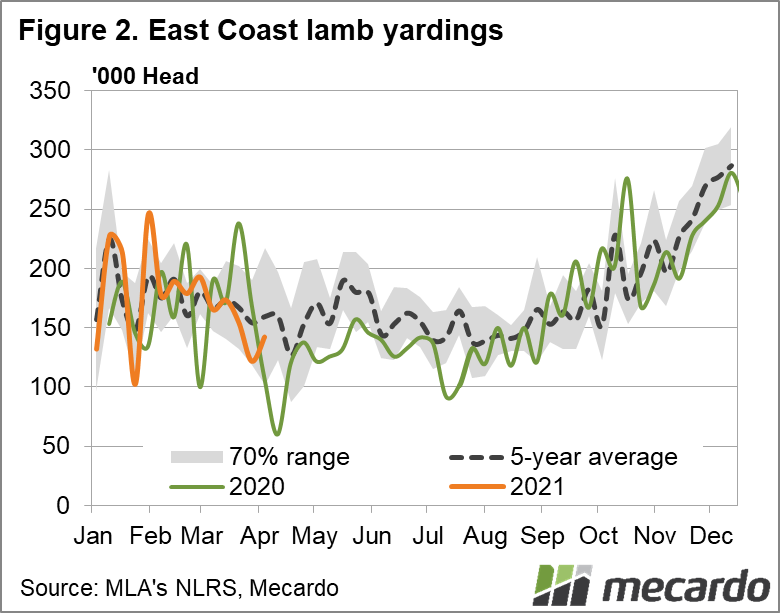