The disaster zone that was last weeks ovine market, is yet to be contained. We thought last week’s drop may have been enough to bring out some competition, but while the price falls have slowed, processors appear to be set in their requirements and did little to stop the market sliding further.

The Eastern States Trade Lamb Indicator (ESTLI) closed on Thursday at 769¢/kg cwt, down 13¢ or 1.3% on last weeks close (Figure 1). Trade lambs actually had the best result for the week, with all other lamb and sheep categories seeing larger declines. Restocker lambs were hit the hardest, losing 71¢ or 8% to 802¢/kg. All east coast lamb indicators have lost 125-160¢ in the last four weeks.

Western Australia was the only state to hold its ground last week but wasn’t exempt from this week’s falls. Restocker lambs in WA lost a whopping 154¢ in just one week, well and truly playing catchup. At 599¢/kg cwt, they are the cheapest lambs in Australia; and currently cheaper than Mutton in some states. At a national level Mutton prices also headed lower this week, pushing under the 600¢ mark with the National Mutton Indicator at 582¢/kg cwt. Mutton is still selling at prices close to those achieved this time last year.

Lamb yardings on the east coast for the week ending the 3rd of July were 3% lower than the week prior. After a flush of sheep presented last week, throughput returned to the 33,000 head mark that which appears to be the lower base that the numbers keep bouncing off. Since April, east coast sheep and lamb yardings have been following the lower range of the normal seasonal trend (Figure 2).

The biggest movement in yardings came from Victoria where sheep and lamb yardings were 14% lower than the week earlier and 20% below the 5-year average.

There was little change to the number of lambs slaughtered week on week, which isn’t far off the levels of this time last year. Considering demand for slaughter stock is much weaker than this time last year, it’s little wonder that processors aren’t moving quickly to open up more kill space.

Looking at the rain on the forecast for the eastern interior, there is unlikely to be much mutton coming to market in the weeks ahead. Price support may appear if supply gets tight enough, but the uncertain export markets are driving things at the moment. 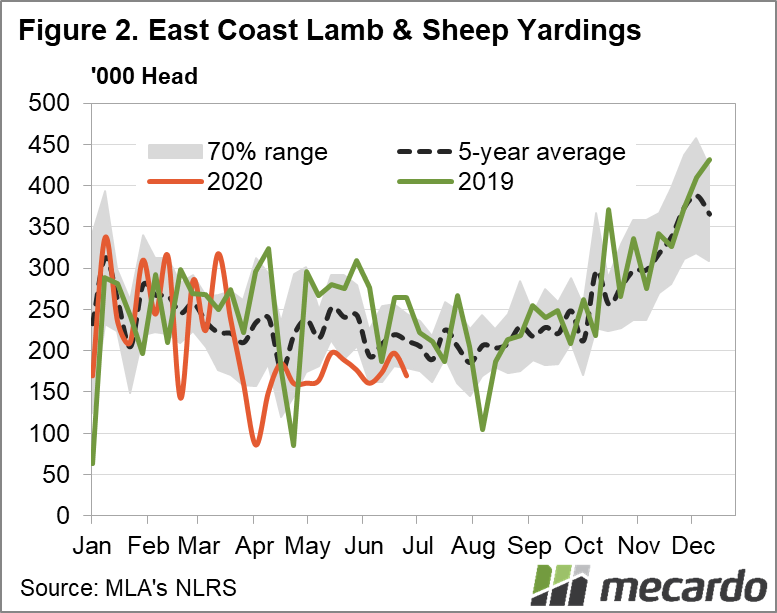