Low old crop stocks and uncertainty surrounding the potential of new season global wheat and corn stocks have seen hikes in international wheat futures over the last fortnight. Locally new crop prices have been on the rise, but despite wheat physical contracts being over $300 they don’t look like great selling at the moment.

After looking like they were going to ease into the northern summer, Chicago Soft Red Wheat (SRW) futures have staged a dramatic turnaround.  Old crop wheat and corn stocks are being soaked up by China, and the weather hasn’t been conducive to having confidence in new crop yields.

In Australia, stocks remain strong after a record harvest, and autumn rains have been good for both east and western cropping areas.  Growers are sowing into solid moisture banks and looking at again having plenty of grain to sell, but there is plenty of time for things to go wrong.

Global oilseed stocks are already back close to those seen in 2013, but corn and wheat stocks remain much higher. Most of the strength in prices currently being seen is due to worries about what could happen with supplies if there are issues with new crops.

Dec-21 SRW has rallied strongly from April lows to gain 7% in our terms, and hit a three-month high of $314/t (Figure 2).  ASX Jan-22 has also picked up, rallying from $290 in early April to $306/t on Monday. Physical multigrade wheat contracts have also moved through the $300 port level, and this might have triggered some sales thanks to $300 being the magic level for wheat some growers.

We know the long-term average ASX wheat basis is close to positive $20/t, and can be much higher in low supply years.  Locking in physical prices, or selling ASX Wheat futures essentially locks in basis, and selling now would be locking it close to historical lows.

Using swaps for pricing would be preferable at the moment.  If wheat basis moves back to zero, growers will have picked up returns in basis.  Basis movements in the opposite direction seem unlikely, with Australian wheat likely easily find a home in export markets at this basis.  Those concerned about further increases in US prices should look into options or collars to put in a floor price. 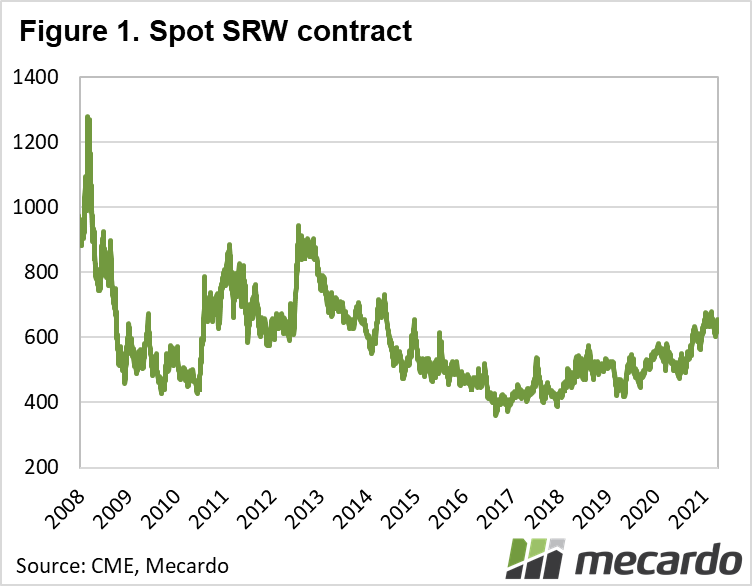