In promising signs for the sheepmeat supply chain, the latest slaughter figures suggest that capacity limitations in meatworks have eased. This didn’t translate to stronger competition at saleyards this week though as prices were generally softer.

33,4657 lambs were processed in the east last week which was an 18% jump on the week prior, 14% higher than the same week in 2021, and just 2% shy of the five year seasonal average. Victoria and South Australia drove the lift in east coast slaughter, with 29% and 57% more lambs processed compared to the week prior in those states.  East coast sheep slaughter also jumped by 26% on the week prior.

Yardings figures for the week ending the 4th of February indicate that producers are still hesitant about the market volatility and are happy to hold onto their stock for longer. 186387 lambs were yarded in the east and while this was a big jump on the previous shortened sale week, it was still 24% fewer lambs than the same time last year. Sheep throughput was 16% below the same week in 2021.

The Eastern States Trade Lamb Indicator (ESLTI) dropped 22¢ over the week to land at 822¢/kg cwt. The ESTLI is now 25¢ lower than the same time last year. In the West, the Western Australian Trade Lamb Indicator fell 12¢ to 833¢/kg cwt, still sitting at a premium to the east.

The market was cheaper, nearly across the board. Light lambs were the only national indicator to end in positive territory, gaining 8¢ for the week to 850¢/kg cwt. Heavy lambs dropped 31¢ and Restocker lambs were down 28¢.

Mutton was dragged down in the cheaper market and as a result the National Mutton Indicator lost 19¢ over the week to 573¢/kg cwt. The NMI is currently 60¢ or 9% lower than the same time last year. The Australian dollar increased by 1.2% over the week to 0.7186¢ which may have led some export buyers to take a step back.

More capacity in meatworks would in theory suggest more competition at the saleyard and upside in price. However, it wasn’t the case this week. It’s likely to take a few weeks to move through any processing backlog, and we know the lambs are still out there gaining weight. 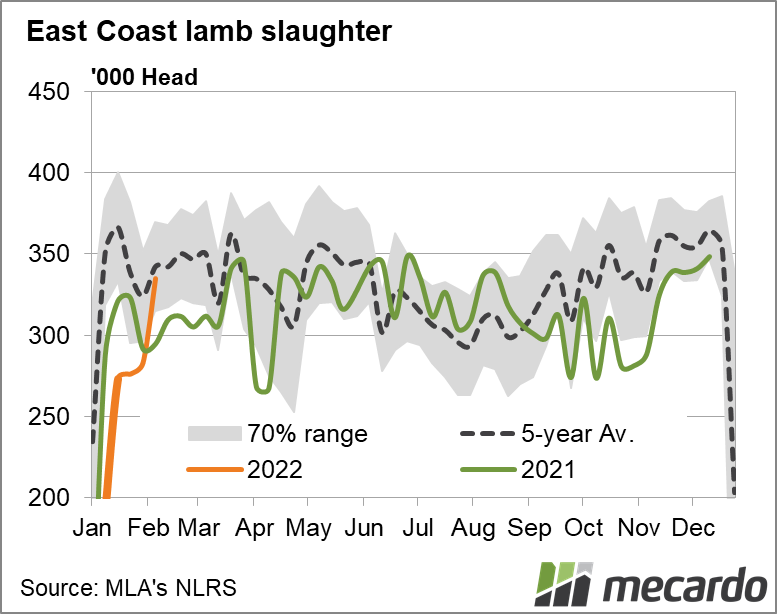