In 2006-7 the AWTA started to break out core test volumes for wool with a fibre diameter below 15.1 micron, which gave a view of production at this very fine end of the merino micron distribution. This article takes a look at recent production volumes for these micron categories.

Figure 1 shows 12 micron AWTA core test volumes by season (the current season is only to April) in farm bales (left hand axis) and the proportion of this volume sold at auction (right hand axis) from 2006-7 onwards, when the AWTA data became available. The volume stayed around 15 bales until 2015-16, and then started to lift sharply to 209 bales in 2017-18. Since then it has ranged between 100 and 200 farm bales. At the same time the proportion sold at auction dropped to effectively nothing (it did get back to 5% in 2018-19).

For a look at where the very top end of wool production goes the Loro Piana ‘Gift of Kings’ apparel range is a good start. The ‘Gift of Kings’ range uses 12 micron wool, for which Loro Piana buys wool from farmers in Australia and New Zealand each season. Loro Piana also has apparel made from Vicuna, an even more exclusive apparel fibre.

In Figure 2 the analysis is repeated for 13 micron wool. Supply was stable to 2013-14 and then started to pick up. Unlike the 12 micron, around half of the 13 micron production has been sold at auction although that has fallen this season to a low 12%.

Finally in Figure 3 the analysis is repeated for 14 micron wool. Volume began to trend higher around 2011-12, albeit with some wild swings around the trend. In contrast to the finer micron categories, nearly all of the 14 micron is sold at auction, with the proportion varying as wool stocks are moved between years.

If you are trying to value 12 micron wool, there is no sales data by which to do so. There is more data for 13 and 14 micron, which allows a valuation to be made. Production in the drought seasons to 2019-2020 was higher as would be expected and looks to have now fallen with the improved seasons. 12 and 13 micron volumes remain constrained, which should help maintain price levels. 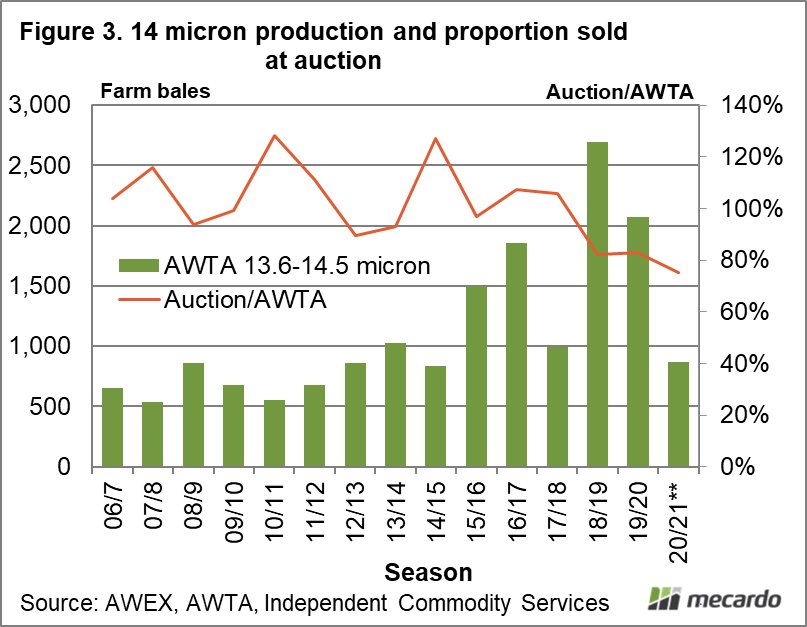