There is a range of quality/membership schemes officially listed with AWEX and therefore noted in sale catalogues in the Australian wool market. The Pareto principle holds for these schemes with four of them dominating the volume of accredited wool sold at sales this season. This article takes a look at the range of schemes and their volumes.

The Pareto principle (also referred to as the 80/20 rule) basically says that a majority of outcomes will arise from a small number of possible causes. For 2020-21 AWEX  lists 19 quality/membership schemes which are officially recognised in sale catalogues. Of these 19, four schemes have accounted for 96% of accredited lots sold this season to date which fits with the Pareto principle.

Table 1 shows the schemes listed by AWEX, sorted by the number of sale lots sold this season from largest to smallest. Note this list only counts lots sold at auction so it does not capture wool sold outside of the auction system. It is not envisaged that this would make a material difference to the order of the list or to the nature of the distribution of volumes across the different schemes.

The top four schemes vary in their approach to mulesing and breed focus. Sustainawool, the largest scheme, has sold nearly 60,000 merino farm bales this season, along with a small volume of non-merino wool of 2,500 bales – as it stands it is basically a merino scheme by virtue of the wool accredited to it. In terms of non-mulesed (CM-NM) wool sold, some 37% of Sustainawool merino wool sold this season (to date) has been CM-NM. This means Sustainawool covers wool from both mulesed and non-mulesed sheep.

The remaining two schemes (Authentico and RWS) stipulate no wool from flocks still using mulesing as a management tool, so they are specifically CM-NM schemes. Like the two larger schemes the Authentico volume is heavily concentrated on merino wool. The RWS scheme varies from the other schemes in this respect, with a much larger proportion of non-merino wool. For the season to date one third of RWS accredited wool sold at auction has been non-merino (8,400 farm bales from a total of 17,000).

The challenge with quality schemes is to gain the confidence of the supply chain and then to deliver enough volume to enable the supply chain to plan and acquire accredited wool for a wide range of yarns and fabrics, which is no easy feat. For the key merino micron categories by volume it is still early days for these schemes, with volumes still small relative to overall volumes. 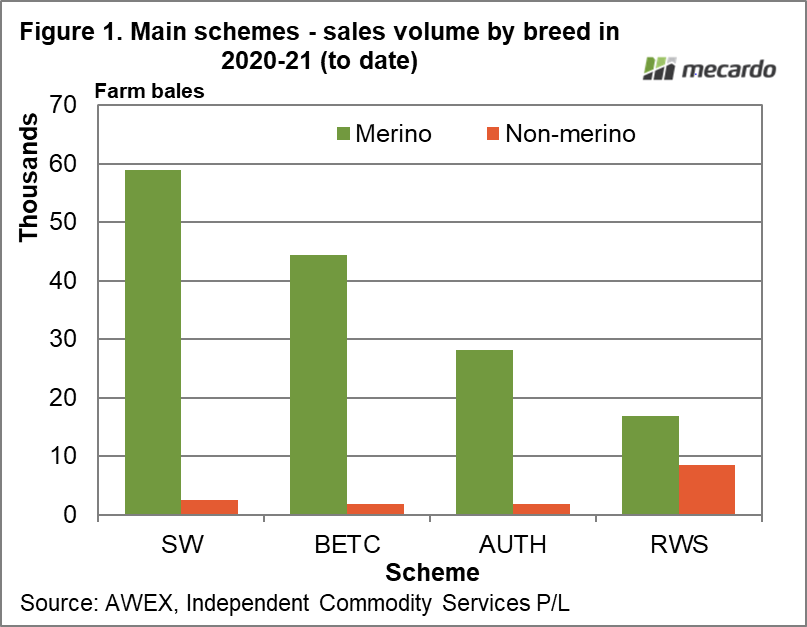