This week the Eastern Market Indicator (EMI) managed to reverse some of the falls of the past two weeks, albeit marginally, whilst the Australian Wool Exchange (AWEX) reported the strongest buyer focus was on ‘good style, low vm (less than 1% vegetable matter) wools’.

The Western Market Indicator lifted by another 8ȼ to finish the week at 1458ȼ, with all indicators lifting between 2 to 26ȼ bar cardings which fell by 5ȼ. Fremantle sold over 1000 fewer bales this week compared to last, passing in 19.2% of the offering.

In Sydney and Melbourne, the finer types performed strongest with all indicators 18.5 and finer posting gains.  17.5 MPG in Melbourne was the standout, lifting 21ȼ  on the week prior, to 2457ȼ/kg.

Medium type wool results were mixed, with the 19.5 & 20 MPG in Melbourne posting small gains of 7 & 2ȼ  respectively, whilst the others recorded small falls or stayed put. Cardings in Sydney lifted just 1ȼ but fell 2 cents in Melbourne & 5 cents in Fremantle.

On Mecardo this week (view article here), Andrew Woods took a closer look at premiums for Responsible Wool Standard certified wool from South Africa and Australia. Interestingly, this week AWEX  reported “intense bidding for specialty Non-Mulesed wool” with premiums of 200+ cents, when compared to similar Mulesed lots. This matches up with Andrew’s analysis which calculates Australian Ceased-museled/Non-museled wool premiums have been on average 257 cents, whilst in South Africa, the premium has been 323 cents.

Another large offering next week of 51,295 bales listed with all centres selling on Tuesday & Wednesday, with Melbourne selling on Thursday again. 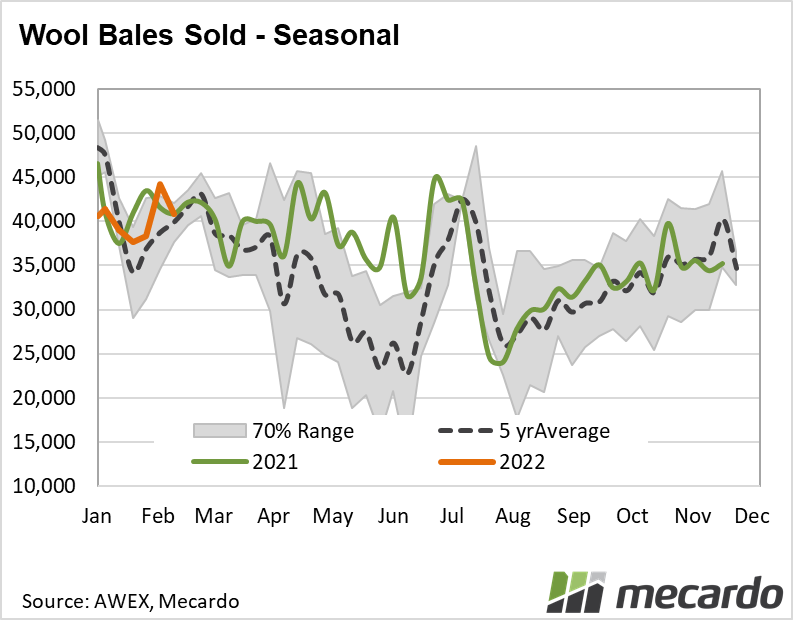