It seems like this is the hundredth article we’ve written on Covid-19 impacts on livestock slaughter, but here we are again. This time it’s not just processors who are being affected by staff shortages, for livestock producers it’s the worst kind of bottleneck.

This time it’s not government mandated restrictions on workers, it’s staff getting sick.  Now that Covid is very much out and about, it seems every second person has it, and at the moment that means seven days at home, and not at work.  Meat processing workers aren’t easily replaced, and as such processors are either closed or running at limited capacity until infections fall.

Measuring the impacts on slaughter capacity, and therefore slaughter demand for lambs, sheep and cattle isn’t that easy.  We have a week of data, but it did include a public holiday, so we’ll get a better idea this time next week.

Figure 1 shows how east coast cattle slaughter has opened up, and it is well below the equivalent week from last year.  Just over 39,000 head of cattle were slaughtered in the week ending the 7th of January, down 42% on the same week last year.  There was one less day, with Monday being a public holiday, but that should only see slaughter down 20%.

For sheep and lambs things weren’t quite at bad, with east coast slaughter down 34% for both categories, compared to last year.  Again, we would expect a 20% decline with one fewer working days, so there has been an impact.

Victoria, the biggest lamb slaughter state was down by just 18% on last year, but this was due to sheep slaughter being down 48%.  In South Australia 69% fewer lambs were slaughtered.  NSW was down by 37% for lambs, and 33% for sheep.

Figure 2 shows that sheep & lamb slaughter should ramp up quickly, as January is usually a big month for slaughter. The annual MLA lamb advert usually sees demand pick up to match supply, but this might not be possible this year.

Saleyard prices started the year well down on the end of 2021, but have rebounded this week. This might be due to lower yardings as producers baulk at lower prices, but next week will tell the story. 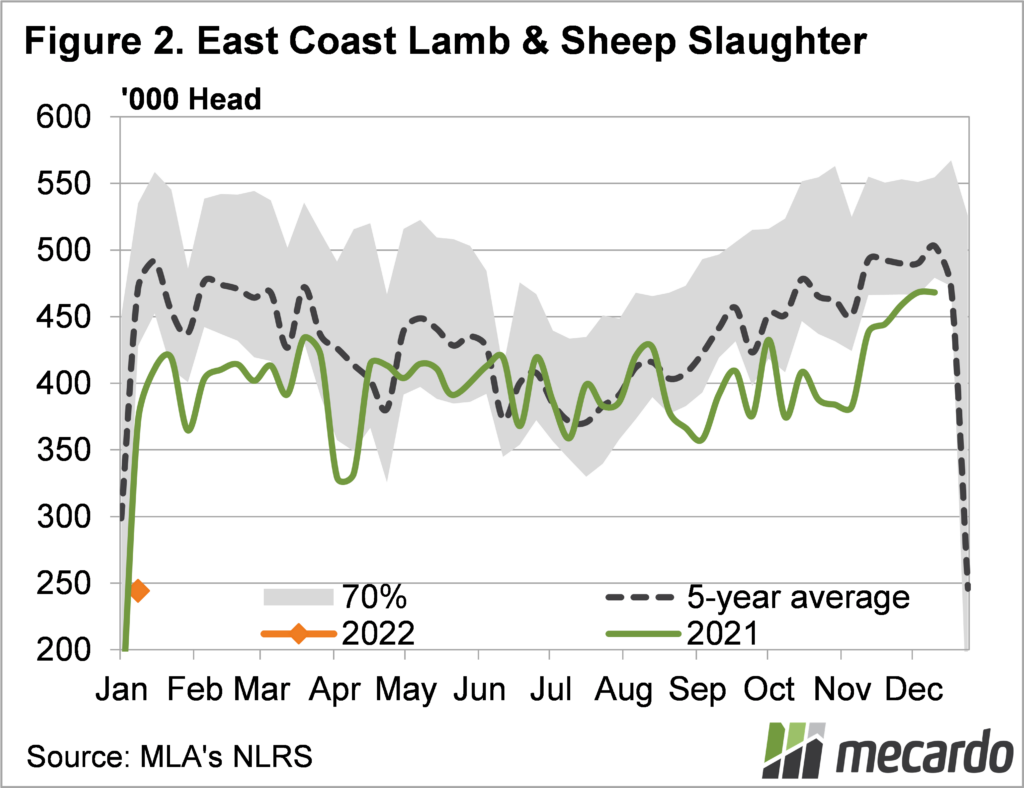