Queenslanders calling out for more cattle

Another week, another Eastern Young Cattle Indicator record, as the benchmark price in the market climbs within reach of the $12/kg mark. The EYCI closed yesterday (Monday 25 January) at 1191.52¢/kg, having jumped 50¢/kg in the past week. This is despite yardings kicking into gear and rising over the past week - not just on the very sluggish first weeks of January, but also on the same period in 2021. Processor slowdowns earlier in the month haven’t had any big impact on price either so far this year, as Queensland dominates the young cattle trade, both at home and further south.

According to Meat and Livestock Australia, restockers are currently buying a majority of young cattle, at 47% of all sales, and are paying significantly more for them – hence the continued price rise in the past week, especially in southern Queensland and northern NSW. Lotfeeders are also showing confidence in the market, loading most of the cattle restockers aren’t, and leaving processors with less than 7% of EYCI eligible lots on Monday.  MLA data has restockers paying 260¢/kg more per head than processors, and 220¢/kg more than lotfeeders.

It’s not just the new year and recent rainfall that has pumped up the demand in the restocker market in southern Queensland. According to recent analysis done by AuctionsPlus, that region was at the top of the buyer rankings in the final quarter of 2021, purchasing 23% of all cattle sold through the platform. Southern Queensland purchased close to 40,000 head online in the final three months of last year, which was 43% more than the same quarter of 2020, and 272% more than that period in 2019.

It’s worth noting that despite pregnancy tested in calf heifers being the largest category offered in total on AuctionsPlus across the country in 2021’s fourth quarter – nationally, females made up 56% of all purchases – Queenslanders were after the heifers and were the only major region buying more girls than boys. The region also took the highest percentage (27%) of 400kg plus steers sold through Auctionsplus, a category that rose in volume by 30% year-on-year in quarter four 2021. This is an indication of the lotfeeders presence in the market, with feeders buying an extra 2530 cattle at the Roma sale last week (compared to the week before) and paying more than the overall indicator price for the offering. That said, restockers still took more cattle home and paid a 229¢/kg premium over feeder buyers.

Annual feature sales in the south are nearly complete, but price indicators out of Queensland indicates they are far from full when it comes to cattle numbers. The national feeder steer indicator is at 567¢/kg (liveweight), just below the record set last month, with the Queensland price operating at a nearly 10¢/kg premium to this. A majority of their buying is currently in the 400kg+ range, but having both them and the restockers on the market for more cattle should keep that EYCI high for now. 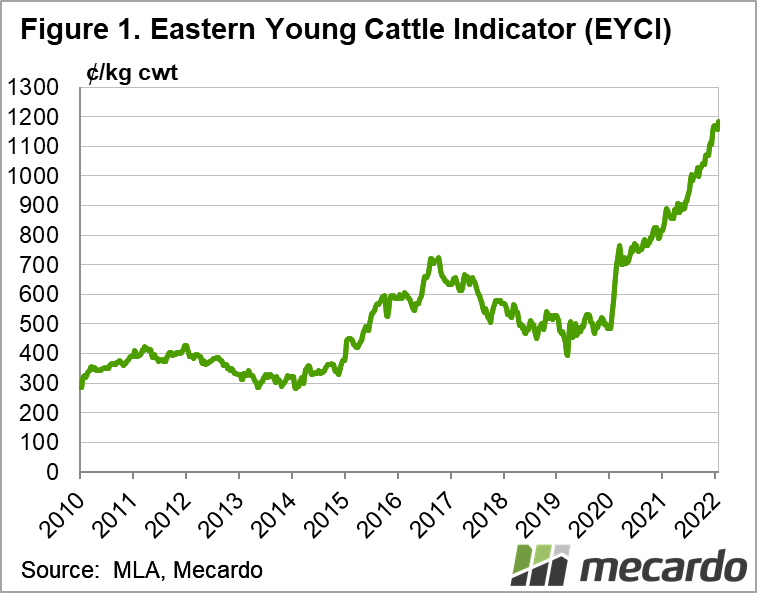