In the not so distant past, grain trading houses put huge emphasis on crop condition analytics, reports from ‘boots on the ground’ and anything else that might help them get an advantage when trading. These days, with satellite technology, NDVI data and the internet, global crop conditions are freely available in real time. Commodity exchanges like CBOT, ASX and Euronext respond almost simultaneously to changes in the weather, geopolitical news or economic triggers. Consequently, at a time of high global demand and short sup-plies, the market can show increased volatility.

The market has virtually given up watching weather forecasts for Brazil.  The southern half of the country has not had decent rain for months, and with the corn crop at pollination and no rain on the horizon, hopes are fading fast. The northern areas are ok, but analysts have not finished ratcheting the production numbers down with some analysts suggesting a low 90mmt crop (compared with USDA’s 109mmt).  This puts enormous emphasis on the US crop.

The US farmer has again shown how adept they are at getting the crop in.  Seeding progress for corn is at 46%, up from 17% last week and 10% ahead of average planting pace. Spring wheat is similarly flying along, at 49% planted, versus 28% last week and 32% on average.  This is perfectly timed for a decent shot of moisture over the coming week across some abnormally dry areas in the US Northern Plains and corn belt, and also reaching through into the dry Canadian Prairies.

While rainfall models are showing some variability, rains forecast across Alberta and SW Saskatchewan are right on time for the Canadian farmer.  The forecast of 21.5m acres seeded to canola may change – the StatsCan number released last week was actually down 1.16m acres from the previous season – despite prices going through the roof.  SE and C Saskatchewan and Manitoba look to remain dry in the 7-day forecast which should keep the risk premium built into canola prices for the time being.

The sleeping giant is of course Russia. There has been some winter kill in the central agricultural regions, but ample moisture will see the bulk of the winter wheat in the Southern regions head into Spring/Summer in ideal conditions.  Spring wheat planting is picking up pace after a sluggish start and is expected to increase 0.1mha year on year.  SovEcon estimate new crop wheat production at 80.7mmt vs 85.9mmt in 2020.

Closer to home, excellent seeding rainfall has been recorded across the main cropping areas in WA. Combined with the moisture from TC Seroja a few weeks ago, WA farmers are celebrating one of the best starts in recent memory.

East Coast and SA have remained stubbornly dry for the month of April.  While NSW has ample sub-soil moisture, much of the Vic Mallee and virtually all of SA require a good rain to get the season underway.

Expect more of the same.  Wheat supplies for the coming season look ample, with Russia again likely to dominate export pathways.  It will be interesting to watch what happens to cash bids/basis when new crop wheat supplies become available.  Wheat futures are in lock-step with corn with little regard for their own fundamentals. 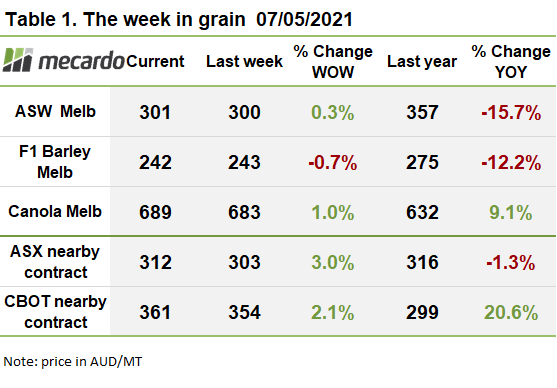 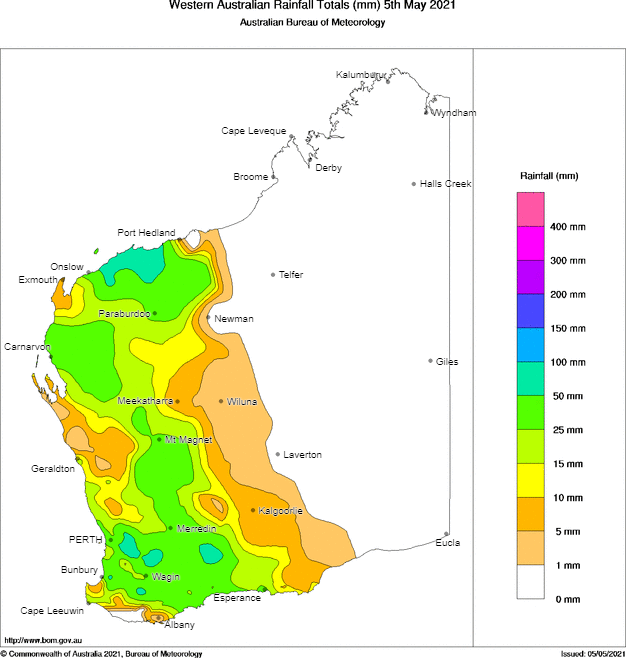