Rain on the plains

Ag commodities are like a buoy in the ocean at the moment, rolling up and down with each wave. The major issues remain unresolved in the background, but when there are so many balls in the air and so much depending on the fate of this years’ harvest, it is not surprising we see these peaks and troughs.

Outside of the war in Ukraine, the single biggest driver of wheat futures has been the state of the US winter wheat crop.  At 27% good to excellent, you have to go back 20 odd years to find crop conditions in such poor state.  However, there may be some relief at hand.  The seven-day forecast turns much wetter for some of the parched central US Plains, including Kansas and Nebraska. (figure 1) Wheat is an amazingly resilient plant, so should these rains eventuate, we should see an uptick in crop condition ratings.  I can’t help think that some damage has already been done and would think it difficult for total US wheat production to achieve trend line yields.

There are also some concerns that US mid-west corn belt and some spring wheat areas are too wet and delaying seeding.  Like a bear coming out of hibernation, the season in the US appears to be slow in shaking off the winter.  The window is wide open for the spring plant, but further delays may see the US farmer switch to more soybeans at the expense of corn at a time when the market is trying to buy more corn acres.

Stats Canada released their preliminary acreage report this week and surprised the market by increasing wheat area by 7% at the expense of canola.  Given the surveys are completed months before hand, this may change especially as the price of canola has surged recently.  However, the weather map as shown, reveals trends that are not showing signs of letting up.  Manitoba and SE Saskatchewan are wet and have heavy snow still present in some places.  SW Saskatchewan and Alberta are dry and don’t see any obvious signs of relief in the coming 7 days.  The Northern Prairies are still also seeing regular frost and snow delaying seeding despite an OK moisture profile.  So while on paper, the StatsCan report could be seen as bearish wheat, the reality may be different.  For reference, spring wheat planting window is usually from May 1-31.

Lastly, in a much clearer signal for the oilseed market, Indonesia announced a ban on palm oil exports.  Initially this was thought to only include the refined and bleached product, but was more recently expanded to include crude palm oil.  At 55% of the global veg oil market, the decision to cut exports will leave major users scrambling to find a replacement and adds more fuel to the fire under the oilseed complex.

A good soak across the US Plains will help to stabilise the winter wheat crop but ironically, too much rain will delay spring wheat planting.  This year, every possible threat to production will be under the microscope, analysed and cross examined before it is in the bin.  More war rhetoric out of Russia will also keep the market well supported. 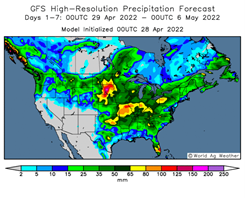