In the vegetable oils complex, the key commodities of palm and soy oil have enjoyed a sustained strong rally over the last six months on the back of tightening world supply and demand. However, recent rains in a previously parched Brazil caused a pronounced price fall, amplified by a speculative trader selloff. Australian Canola prices have fallen in unison, but was the market reaction premature given EU prices are holding well, and Brazil is still in the grip of a La Niña?

Soybeans and Palm oil have seen a good run in the second half of 2020, but what was driving the sustained rally over this time? Malaysian Palm oil is currently trading around the highest prices seen in almost a decade, having rallied strongly since the start of June, to lift an incredible 44% in AUD terms up to $1,200/mt (Figure 3). The skyrocketing price was driven mostly by severe labour shortages caused by the exodus of Indonesian guest workers from Malaysia due to COVID-19.

The council of palm oil producing countries (CPOPC) recently commented that global supply of palm oil is should remain tight out to Q1-21 due to La Niña, and continued labour shortages in the key producing country of Malaysia, which I first reported on in July (view article here).

CBOT soy oil in AUD terms has also risen 25% over the same period, most likely influenced by the exponential ramp up of palm oil prices, in conjunction with a steadily tightening world soybean supply demand balance. Over this time, the USDA’s world soybean stocks to use ratio estimate fell from 27.28% to 23.45%, the tightest it has been since 2014 (Figure 2).

Recent rains in Brazil have driven US CBOT soybean prices close to 5% lower in AUD terms since the high of $600 AUD/ tonne reached in late November. Only the Chinese rapeseed oil followed the market down (Figure 3).

The soybean price fall was potentially exacerbated by falls in Chinese US soybean purchases and a reduction in US speculative trader net positions as profit taking occurred in the leadup to the thanksgiving holidays.  Furthermore, short positions have begun to build in response to the bearish Brazilian rainfall news.

In the EU, Australia’s key export market, where demand is largely driven by regulatory schemes mandating the usage of biodiesel, the influence of higher world soybean and vegetable oil prices has flowed through to see canola prices rise in AUD terms by around 10% since June. They hit highs of $675/ tonne in mid-November, before falling back to the present level of $663 (Figure 1).

Despite EU prices holding up well against recent falls in the international oilseed complex, Australian canola prices have not been as durable to international pressures, with canola delivered Geelong dropping 4% in the last three weeks to $581/ tonne (Figure 1)

Brazilian rainfall has been very inconsistent and unreliable so far this year, with Brazil’s DERAL-PR rural economics department reporting the soybean crop condition at only 72% good, which is the worst rating in five years. More consistent rainfall going forward will be required to support current record USDA crop estimates of 133mmt. It is still early days yet in the Brazilian season, and La Niña brings no guarantee of rain at the times it’s needed most, so recent price falls could very well have been a premature reaction in the market.

Strengthening world prices for the key varieties of vegetable oils including soy, palm and rapeseed (canola), driven by tightening supplies, have helped support canola prices in Australia at heights not seen for ten years. However, the perception of an improving outlook on Brazil’s soybean crop as a result of recent rains have weighed on the world oilseed complex in recent weeks. Despite the bearish sentiment from recent Brazil rains, more inconsistent rainfall in Brazil stemming from La Niña could well play out to be a more bullish factor as the season progresses. 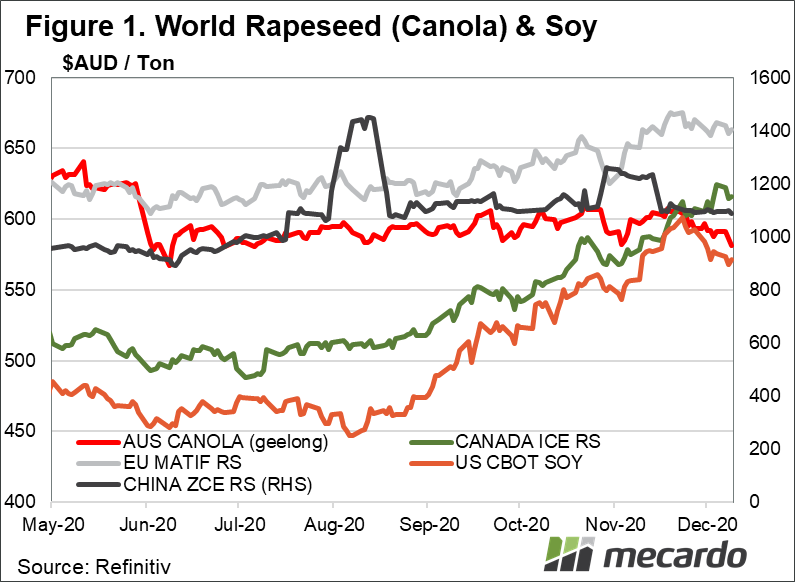 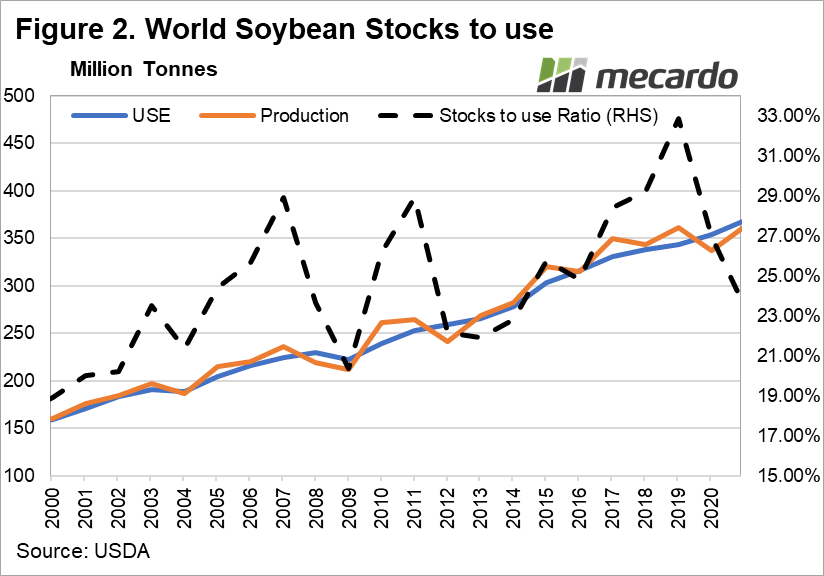 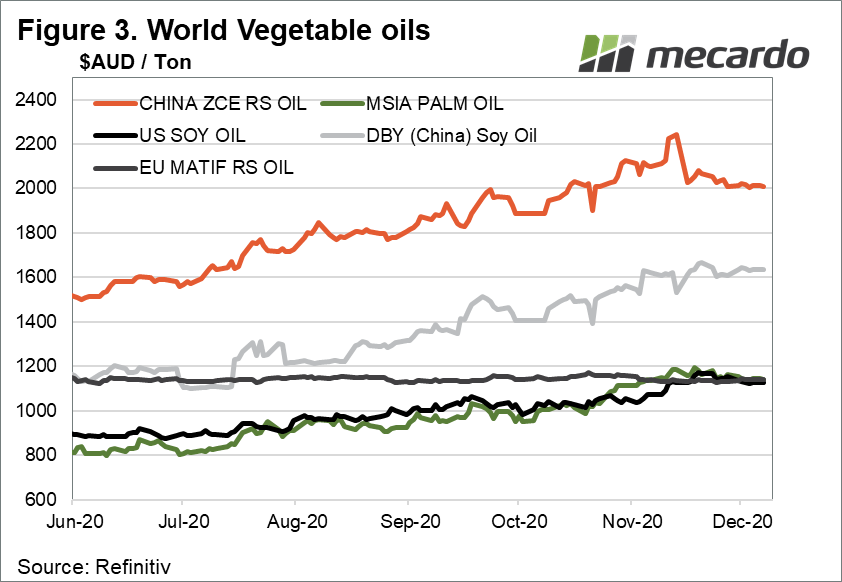