It’s has been said time and time again about grain markets that a lot can happen in a week. This week has been no exception with a raft of information, some new, some old, being added to the noise that is swirling around this year’s grain markets.

Last week, we wrote about how the UN was negotiating with Russia to open humanitarian corridors to allow Ukrainian old crop wheat access to the Black Sea.  The UN is chiefly concerned at a looming humanitarian crisis evolving in the Horn of Africa and parts of the Middle East where an estimated 40 million people are facing food shortages.  Prior to the war, Ukraine was a major supplier to these regions.

This week, the market has taken note of Russia’s ‘openness’ to consider such a move, potentially freeing up 20mmt of wheat that has been blockaded in Ukraine.  It comes with a proviso however  that some of the sanctions currently levied on Russia are either removed or reduced.  It places the UN in a tricky situation.  Help to avert a hunger crisis, but at the same time potentially fuel the war machine.  As time goes on, it seems increasingly unlikely that a corridor will succeed.

The supply issue created by the war in Ukraine is probably the single biggest issue driving the wheat market to these levels.  Should this pillar of support be removed, it would cause a significant move lower.

The war in Ukraine is also seeing some shifts in global trade routes.  China has signed some agreements recently that could change the way some grains are traded.  Firstly, China has quietly granted permission to Canadian canola trades again, notably Viterra and Richardsons.  These two companies had been the largest of the canola traders into China prior to being blacklisted.  China has also recently signed an agreement with Brazil to supply corn which could bite into traditional US sales.  The have also signed agreements with Russia to supply wheat and pulses after having cleared phytosanitary concerns.  China is the largest buyer of Australian wheat this year, so any agreement with Russia could undercut trade to arguably our largest market.

Reading into market movements at this time of year is akin to predicting next week’s Powerball numbers.  There are simply too many moving parts and unpredictable events at play.  You could argue that this time of year we see buyers move to the sidelines in anticipation of Northern Hemisphere crop becoming available and as such, it is not uncommon to see a flattening of prices.

Looking forward, there remain a few red flags.  US Spring wheat is woefully behind schedule.  North Dakota, which accounts for 47% of the spring wheat acres, is just 22% sown, behind the 5-year average of 80%.  Neighbouring Minnesota is only 11% sown far behind the 90% 5-year average.  The final date for insuring the crop has past (May 25th) so any unsown acres will have either had to have claimed for ‘prevent plant’ insurance, or keep their fingers crossed that the season is kind.  It seems entirely likely that the area of ‘prevent plant’ will be one to watch.

It feels like the market has priced in much of the current supply dynamics.  Without any new ‘issues’, the market is simply following the path of least resistance lower.  The next period of volatility is likely to be Northern Hemisphere summer when we get to observe spring sown crop potential. 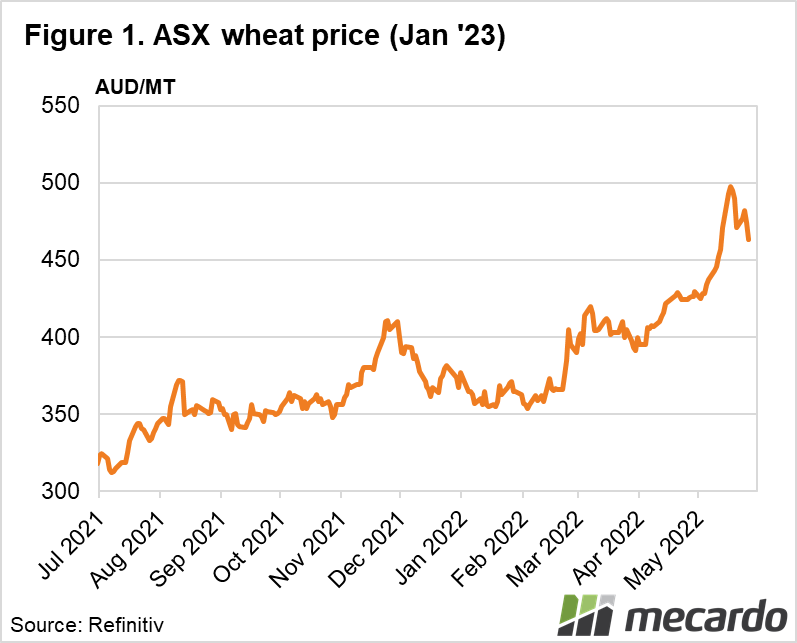