Rebuild figure close, but not here yet.

Female slaughter was headed in the right direction for a cattle herd rebuild in quarter four of 2020, but it had yet to hit the magical 47 per cent mark. According to the latest official cattle slaughter report from ABS, the Female Slaughter Ratio (FSR) reached 48.2% for October through to December last year. A big dip from the 53% reported in quarter three of 2020, but still well above the 10-year average, and at a time of year when female slaughter is historically declining.

With seasonality applied to the now quarterly ABS data, prior to last quarter, monthly FSR percentages have only been below 50% once since March 2018 (and that was in November 2018). Before that, for the second half of 2016 and all of 2017, the FSR was below the herd rebuild indicator of 47%. In fact, it dropped quite dramatically from 50% to 40% in the six months from June 2016 to January 2017.

How is this relevant now? Circumstances were much the same. We had what was then a 20-year low cattle herd, and widespread solid rainfall across the eastern states. We watched the Eastern Young Cattle Indicator first surpass 600¢/kg, and then 700¢/kg, and saw restockers buying percentages jump significantly. Sound familiar? While it is seemingly taken longer to get there this time around, perhaps because of the severity and widespread nature of the drought in 2018/19, this should indicate that a FSR in the low 40’s is on the horizon.

If we look at how 2021 has begun in terms of slaughter overall, MLA numbers show 30% less cattle have been processed for the first seven weeks of the year, compared to 2020, and 35% less than the same period in 2019. To put this into a more historical perspective, weekly slaughter figures for 2021 so far have been between 53% and 22% lower than the five year-average for that corresponding week. This alone would indicate that even if the FSR hasn’t declined, the actual number of females turned-off has to be significantly lower than the same time last year.

There is no doubt more females are either being kept in the paddock or returned to the paddock, and restockers are competing fiercely for them at market. However young cattle prices are likely enough of an encouragement for producers – still in drought recovery mode financially – to be sending females direct to the processors. And with cattle returns having been less consistent than say prime lamb in the past five years, the ‘get in while you can’ mentality could be an influence of the slow-to-drop FSR.  Bottom line? The fall in female slaughter rates seems to have taken longer to react to short-supply and record prices, but it will need to come very soon if MLA’s forecasts for herd numbers are to be realised. 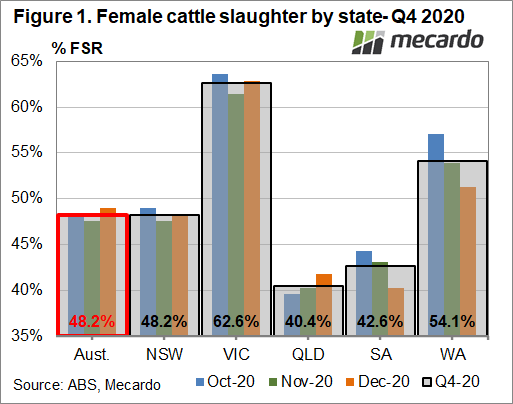